Let My Cat and Mouse Go! 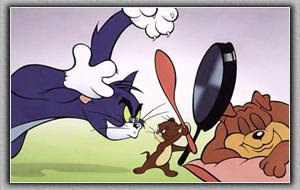 I saw something unexpected channel surfing last Sunday. Cartoon Network was having a marathon of Tom & Jerry cartoons. This was surprising because Cartoon Network stopped showing classic cartoons years ago but a commercial for an upcoming Tom & Jerry Nutcracker Suite cartoon soon made the reasoning clear. Unlike Popeye or the Warner Brothers gang, Tom & Jerry are still considered viable properties for a kid audience which makes sense. The cartoons are all action and the main characters never speak. Plus their motivations are so primal they can still make sense to a young audience.

Sadly this means their classic work doesn't get the loving treatment Bugs, Daffy, Popeye and Droopy have gotten. Those DVD sets are aimed at adult collectors so they contain uncut cartoons with all the excessive violence, unrestrained steroetyping and other "bad things" that an adult viewer can take in context. Tom & Jerry have to be bowlderized for the kiddies. So their three DVD sets take the shorts out of chronological order, repeat some , edit others and at the last minute Warner even decided that two of them were so henious they couldn't ever be released on home video, lest the little tykes be corrupted. All nonsense of course but that's what happens when the powers that be think they can still squeeze some bucks out of the kiddie market for a particular property.
Watching the cartoons now I got more of an appreciation of what they were about, the over the top slapstick that bordered on sadism, the way the relationship between Tom and Jerry became more of a grudging friendship as time went on, something that Chuck Jones never understood since he jsut replicated the Coyote - Roadrunner dynamic when he did his version. I also enjoyed a couple of the few T&Js where dialogue was a factor, "Solid Serenade" where Tom wooed a female cat by playing a standup bass and singing "Is You Is Or Is You Ain't My Baby", and "Pecos Pest" which guest starred Doodles Weaver as the voice of Jerry's Cousin Pecos who stopped off on his way to a TV appearance to rehearse his whacked out version of "Froggy Went A-Courtin'" or maybe he called it "C-C-C-Cranbo!"