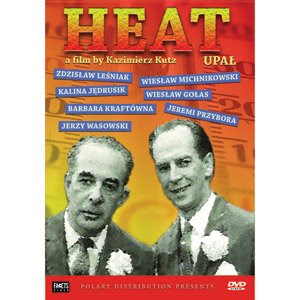 Once upon a time all you would ever see of the movies from Eastern European countries would be art films from a few select directors. In the case of Poland that would mean we'd see the work of people like Andrezj Wadja and Roman Polanski but nothing of the kind of films the Polish people themselves watched. Thankfully with the way the world is today all those formerly mysterious countries are now putting their old films out on DVD for the world to watch. And so we get to see something like Heat, a 1964 comedy that could have stepped right off an American burlesque stage.

The film's Netflix description is misleading because it gives the impression that the movie is just a comedy team strolling through a town and doing bits. It is in a sense but it does have a plot that actually tweaks the nose of the local Soviet-style bureaucracy. The two lead comics play a songwriting team that the town leaders pick to replace them while they go on holiday. This means the two gents go out in rented top hats and morning coats and see what people's problems are. They encounter, among others, a mechanic more interested in a rare foreign guitar than his girlfriend, a lecherous foreign ambassador and a Marilyn Monroe lookalike who wants to drown herself for the good of her country.

This is played out as pure burlesque comedy right in with the absurdist lineage of Monty Python, The Goon Show, Olsen and Johnson and The Three Stooges. With the storyline involving the ambassador, this movie would fit right into a triple bill besides The Marx Brothers' Duck Soup and Wheeler and Woolsey's Diplomaniacs. There's even a chorus line of sexy showgirls decked out as nurses. This movie shows how universal slapstick comedy can be and comes as a huge surprise considering the grim nature of the few well-known older Polish films out there.
Posted by Jerome Wilson at 12:23 PM