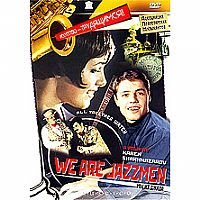 Last night I saw Zodiac which proved to be another 2007 film far superior to No Country For Old Men but my newer revelation is We Are Jazzmen, a 1983 Soviet Russian film about some intrepid 20's musicians who try to become Russia's first jazz band. This was a fun little movie with nice performing and dancing sequences that had a nice sense of humor and proved once again that there seemed to have been a much richer stream of Russian movies coming out in the Soviet era than what we were led to believe even in the Glasnost era when all the Russians would bring over here would be the occasional romantic comedy.

There were a couple of bits that stood out for different reasons. In one scene a Cuban female jazz singer does an elaborately staged Bessie Smith style blues song, but she sings in English and if you listen, her lyrics are a gobbledygook of old blues lyrics that make no sense which sort of shows the way that American jazz and blues always gets turned into something else when it is picked up by other cultures that add their own flavor to the original.

The other bit was a jaw-dropping line from one character, a saxophone player who is resistant to the idea of improvising when he plays. After getting yelled at by his bandmates for playing the same phrase over and over, he says this about improvisation: "It must have come from the Germans. The Germans invent something and we, the Russian people, always pay for it."
At first I thought that was some kind of reference to the two world wars but then I remembered that Karl Marx, the inventor of communism, was German! I don't know if Gorbachev had ascended to power at the time this movie was made but even so, hearing a line like that in a Soviet Russian film is mind-blowing.
Posted by Jerome Wilson at 4:32 PM