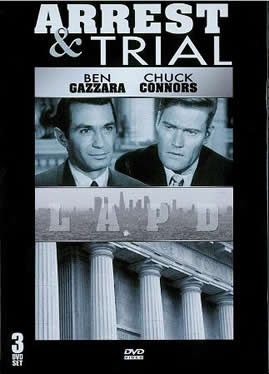 A lot of obscure old television shows are showing up on DVD now and one of the more interesting I've come across is Arrest and Trial. This was a 1963-64 90 minute show on ABC that had a format where the first half followed police detectives investigating a crime and the second half followed the subsequent trial, the same format that Law And Order would use more successfully twenty five years later but Arrest And Trial turns out to be a much different beast than that later show.

The initial sign something is different is that the second half follows the defense attorney played by, of all people, the ex-Rifleman, Chuck Connors. This isn't really a crime show in the tradition of Naked City or Dragnet. It's more one of the human drama type of shows exemplefied by Route 66 or The Defenders. In the three episodes I saw there was no question of who did what and two of them did not have any kind of big climatic courtroom scene. The plots were about troubled people and the police and lawyers found themselves trying to more acting as social workers trying to help troubled families.

Two shows were about rebellious kids, one of them the illegitimate son of a respected judge. The third involved a middle aged machinist who couldn't accept that he could no longer do his job. The acting standard was high with people like Barry Sullivan, Everett Sloane and Michael Parks as guest stars. Of course you also saw some famous faces in bit parts. Harvey Korman turned up as a psychology professor and Martin Sheen played a juvie henchman. It was also cute to see James MacArthur playing a teenage cop-killer five years before Jack Lord started telling him "Book 'em, Danno" on Hawaii Five-O".

Overall the show had a more optimistic view of the world than current police shows. It had neglected kids making up with their families by show's end. On the Law and Order shows, a neglected kid is more likely to turn out an actual murderer and be dragged off to jail by the police at the end while bragging to his or her shocked parents about they did. Arrest and Trial didn't seem to be a bad show but it had the misfortune to be on Sunday nights opposite Ed Sullivan on CBS and Bonanza on NBC so naturally it only lasted one season. I would like to see some more episodes and see if the trends started on these three continued.
Posted by Jerome Wilson at 10:20 AM