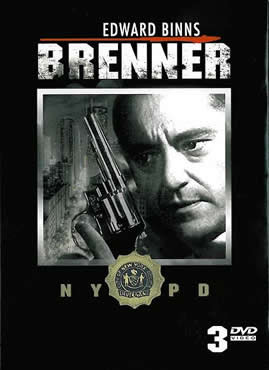 As I've said before an amazing amount of old and obscure TV shows are being released on DVD. One of the recently surprising to me is a cop show called Brenner.

This wasn't even a regular series. It was a CBS summer replacement show that premiered in 1959 and was repeated in subsequent years until new episodes appeared in 1964, all as summer series. The hook of the show was that it was about father and son policemen in New YOrk Coty, Roy and Ernie BRenner, played by Edward Binns and James Broderick. It was unsusal for its day in that at least the five episodes I've seen so far weren't the usual crime stories, butg dealt more with the personal lives and attitudes of policemen than any other show of the time that I know of. There were episodes about a cop ashamed of a hoodlum father, a police captain with a thieveing son, a DA pressuring a cop to lie and so on. It did as well with these stories as you could in a half hour time frame and had a nice low-key New York flavor but the show's most distinctive feature may have been its theme song, a haunting atonal duet of kettle drums and bassoon.

The few episodes I saw had some familiar faces but mostly familiar character actors like Robert Webber, George Matthews, Michael Conrad and JOhn Karlen later best known as Willie Loomis in the Dark Shadows series. There were two "Before They Were Stars" type appearances though, Gene Hackman appearing uncredited as a uniformed patrolman and Grandpa Munster himself, Al Lewis, as a hood.
Posted by Jerome Wilson at 4:11 PM