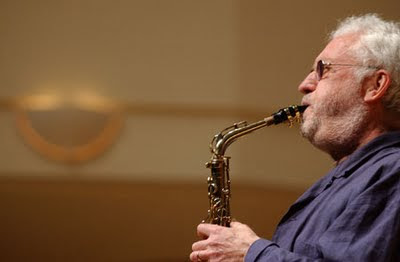 It was said of Miles Davis in his electric period that, no matter what craziness was going on around him on the bandstand, he always played like Miles Davis. The same can be said for one of Miles' innumerable collaborators, the venerable Lee Konitz. No matter what setting he puts himself in, large groups, small groups, duos, solos, with strings, even free improv, he always sounds like himself with that distinctive, high-flying, behind-the-beat sound.

I saw that first hand last night watching him in a concert at the Kennedy Center. At the age of 82, he still has it. He played with a trio called Minsarah whose members looked young enough to be his grandkids. They went through a broad swath of styles and approaches from minimalism to the restless pulse of the Sixties Miles Davis Quintet but whatever the kids threw at him, Konitz was on top of it with unflappable cool. A calypso beat under "Cherokee"? No problem. Ghostly noir sounds on "Stella By Starlight"? Got it covered. A quick dash of Tristano-like unison melody. In his wheelhouse.

Konitz is known as a cerebral player. That is certainly true but he is also capable of great beauty. He proved this when a gorgeous solo alto improvisation led into a ravishing "Body And Soul" that sent lazily sighing notes spiralling out of his horn weith no seeming effort. It was a soft, sensual soundthat seemed to be channeling Lester Young. Through all this he was cracking jokes awith audience and seemed to be having a ball. When drummer Ziv Ravitz ended "Body And Soul" with small tinkling cymbals, Konitz responded with a few notes of "Jingle Bells". This was a fabulous show from a living legend.
Posted by Jerome Wilson at 7:24 AM