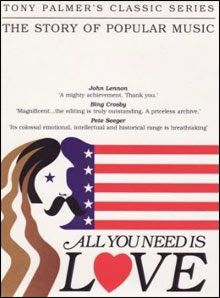 I've heard nothing but great things about the Tony Palmer TV documentary "All You Need Is Love", a very comprehensive 17 part documentary on the history of popular music. Now I've seen the first few episodes and I'm a little beumsed. The shows I've seen do have some rare performance footage and impressive interviews with the likes of John Hammond and Eubie Blake, but some of the juxtapositions and conclusions reached had me scratching my head.

The four shows I saw were on the African roots of popular music, ragtime, jazz and blues. Understandably there was a lot in these subjects on how black musicians had to dilute their work to appeal to white audiences but two of the seeming examples of this were Louis Armstrong and James Brown!  Even odder, the first part of the Jazz program was narrated by someone named Al Roth who insisted that jazz did not come out of the  Storyville brothels of New Orleans (which writes Jelly Roll Morton out of history) or develop in Chicago speakeasies though he doesn't really give any alternative explanation for where it all came from.

The Jazz show is the oddest of the four. Obviously in an hour TV program it would be impossible to touch on all the essential figures in the genre, but Duke Ellington's only mention comes in passing when Hammond discusses the dishonesty of the music business and Count Basie's sole appearance is in contrast to footage of the Ku Klux Klan.  Later on they have musicians like Dave Brubeck, John Lewis and George Shearing talk about the importance of structure in jazz which would seem to be a rebuke to the 60's New Thing which is not even directly brought up. There's no mention of Ornette Cleman and John Coltrane is only shown in footage of his days with Miels Davis.  Interestingly the show does put some focus on what was then the current scene by showing Chick Corea fooling around on a syntthesizer and, since this was a British production, performance footage of British scenesters Mike Gibbs and Ian Carr.


Then there are other odd things like the Blues episode never mentioning Robert Johnson and ending with ten minutes on Billie Holiday who rarely sang blues. Then there is also the way that the same footage of modern day strippers is somehow shoehorned in to the ragtime, jazz and blues episodes. I'll get back to this series eventually and I'll be interested to see if some of these odd features continue in the future.

Posted by Jerome Wilson at 7:37 PM

Labels: All You Need Is Love