There are a lot of things I could write about right now like Esperanza Spaulding beating out Justin Bieber at the Grammys last night (Yay!) but whatever I was thinking got overruled by the news that two figures from wildly different parts of the cultural world died today, George Shearing and David F. Friedman.

George Shearing is one of those musical names I heard a lot when I was a kid, since jazz was very much in TV's common language back in those days. As I got more into the music, I often heard Shearing blown off as a lightweight, "cocktail jazz" sort of pianist but, like Dave Brubeck and Ahmad Jamal, what he did looked simple but had a lot of substance to it, especially in his early days when he played with amazing dexterity as in this clip of Denzil Best's "Move.

Besides which the man wrote "Lullaby Of Birdland". That made him forever cool in itself. 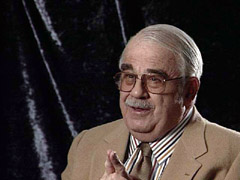 Then there were the laughing, lusty lures of Mr. David F. Friedman, one of the all-time great exploitation movie producers.  He specialized in making soft-core nudie films in the 60's and 70's full of boobs, blood and complete insanity including the likes of Trader Hornee, Scum Of The Earth, Nature's Playmates and Herschel Gordon Lewis's notorious "blood trilogy" including Blood Feast and Two Thousand Maniacs.  I discovered him, as I think many did, in the home video era when some of his wild movies started turning up on videocassette and magazines like Psychotronic Video reviewed them. Then he made contact with Something Weird video which put far more of his pictures out and even released compilations of the trailers. 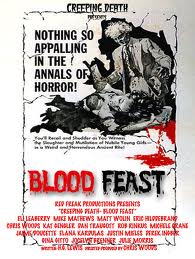 Friedman's movies weren't art but they were wild over-the-top fun with sexy women and crazed plots. I'm not crazy about the ones I've seen where the violence is a bit too gruesome but I've enjoyed the innocent-seeming peekaboo smut gags of Lewis's pre-gore The Adventures Of Lucky Pierre and the wild sex romping of A Smell Of Honey, A Swallow Of Brine where the uninhibited heroine memorably tells her lesbian roommate, "Paula, I may be a bitch but I'll never be a butch."  They don't write dialogue like that anymore.

I actually saw Friedman once at some movie collectors' convention at a table with Something Weird's owner, Mike Vraney, regaling young peole with stories of his days in the exploitation business. I also read his autobiography, A Youth In Babylon, which talked about his time working in carnivals as well as his movie days. A second volume was promised at the end of that book but it never materialized. From the interviews I saw of him Friedman revelled in his rediscovery and never lost his taste for the carny come-on and the razzle dazzle.  He was a showman who made something memorable out of the sleaziest of raw materials.
Posted by Jerome Wilson at 4:53 PM