A piece of the Grail

One of the great things about this modern age that most people either don't realize or take for granted is that  every lost or legendarily unseen piece of popular art out there seems to somehow, someway get back onto the marketplace. Comic books, music, TV shows, movies...it doesn't matter. It may be in some limited edition or from some obscure company but eventually someone gets it out there.  In the past year we've seen things like The Complete Thriller, Warren Beatty's and Arthur Penn's Mickey One, collections of the Barney Google and Bringing Up Father comic strips and a bunch of legendary recordings from the pioneering Free Jazz FMP label resurface.  In the near future a huge DVD set of Ernie Kovacs' TV work and a hardback collection of Floyd Gottfriedson's highly touted Mickey Mouse comic strip will be coming out. I've even seen an announcement of an official release of the Beach Boys' Smile in the near future.  But I've just seen a truly stunning announcement on Amazon.
Next Tuesday this record will be coming out on CD... 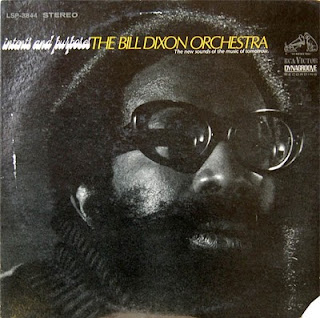 Bill Dixon's Intents And Purposes, one of the hardest to find and most sought after texts of the 60's avant-jazz movement. Actually I thought this had come out on CD back in the 80s at the dawn of the compact disc era, but even if it did that edition is now scarce as hen's teeth.  This was the first large scale ensemble recording of Dixon's music and really the only one recorded until he re-emerged on the performance scene in recent years to work with Rob Mazurek's Exploding Star Orchestra and then with other young musicians he had influenced. Of course this would show up after Dixon's passing but according to its reputation this record is as important as any of Cecil Taylor's or Ornette Coleman's work from this period.  I usually hem and haw over buying things online. I ordered this as soon as I saw the listing.
Posted by Jerome Wilson at 3:01 PM