The thing I love about the piano as a jazz instrument is that a dozen different players, be they Herbie Hancock, Marilyn Crispell, Fred Hersch, Kenny Barron, Alex Von Schlippenbach, Misha Mengelberg, McCoy Tyner, Jessica Williams or anyone else, can sit down at the same piano and play the same song and no two versions will sound the same. And not a single one of them will sound anything like Martial Solal. 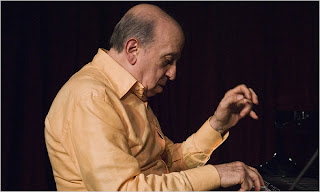 Solal is a French pianist now in his 80's whom I had the privilege of seeing play solo at the Library of Congress last night. He is known internationally as both a player and a composer who has done several movie soundtracks including an insignificant little Jean-Luc Godard picture known as Breathless.  Judging by his piano skills he was well matched by the frisky jump cutting of that film.

When he plays Solal, as he said last night, makes old songs sound new. He twists and deconstructs standards with sudden tempo shifts, repeating phrases and ornate Art Tatum-like filigrees to the point where they are barely recognizable. Everything he played at the concert was a familiar tune but he was halfway through "Here's That Rainy Day" before I recognized part of the melody and I was almost home on the subway before I realized that the last piece he played was "Have You Met Miss Jones".

Solals' fingers move all over the keyboard with a speed and accuracy a man half his age would envy,  shooting out notes like Chico Marx, breaking melodies into crazily connected fragments like Bugs Bunny beating up Franz Liszt's Hungarian Rhapsody in the cartoon Rhapsody Rabbit and tossing out stream of consciousness quotes of everything from "Salt Peanuts" to "Peter And The Wolf". For all of his antics though his playing is not all sugary frosting.  There is substance to it, an ongoing sense of keeping the melody in play and a use of darker chords and dissonances that connects to Thelonious Monk and Ran Blake.  His treatments of "Corcovado" and "All The Things You Are" were downright subdued compared to the other pieces and showed that he can get some feeling out of a song when he has a mind to.

I had previously heard little of Solal's music but now I'm thoroughly impressed.  Fortunately he has a surprisingly large amount of CDs available on Amazon to check out ranging in settings from solos to trios, both with French musicians and an American dream team of Gary Peacock and Paul Motian, to a larger group playing Ellington arrangements. Here is a taste of what I heard at the Library, Solal (in I think the same suit he wore last night) playing "My Funny Valentine" live in Paris.

On a sadder musical topic, the great violinist Billy Bang passed away April 11 after a long battle with cancer. I heard last summer that he was sick but this is still a blow. Bang was the hardest playing and wildest of modern jazz violinists with a sense of swing and feel for the blues that was unmatched. I was lucky enough to see him twice live, once in New York at the Vision Festival and once down here in Takoma Park, MD. Each time his playing floored me. In recent years Bang was best known for the two CDs he'd recorded commemorating his years fighting in Vietnam. At the Takoma Park show I overheard him say that he was preparing to complete that cycle by going back to Vietnam and recording with local musicians. I hope that project came off. Here he is in Poland bowing and plucking with another master, William Parker.

Posted by Jerome Wilson at 5:35 PM