Movie Roundup #19: The Other Side 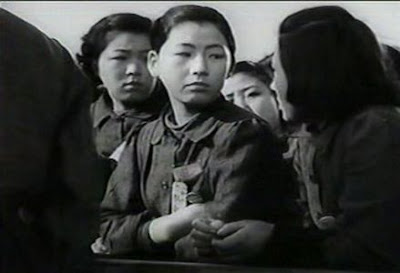 Thanks to companies like Criterion and Kino Lorber today we have access to many movies that were never intended to be shown to an audience outside their home country.  For example Akira Kurosawa's The Most Beautiful, the second film he ever directed, is a World War II propaganda movie about the efforts of young female factory workers supporting the troops on the front lines. There is a message of sacrifice and support for the war effort that you have to mentally put into context to enjoy the film.  Still it's blessedly more subtle than it could have been and still shows early signs of Kurosawa's lifelong humanism.

The protagonists are teenage girls who live and work in a factory making lenses for the bombsites of Japanese planes.  The factory manager, played by Takashi Shimura, an integral Kurosawa player in later films, pushes the girls to up their quota which they happily do although eventually the work takes its toll, leading to illness, breakdowns and arguments.

Despite this plot there's never a sense of hard sell in the movie. The factory bosses are all very solicitous of the girls' health and they happily plunge into their work even if it means shutting themselves off from their families and home life. In the banners shown around the factory there is a quiet acknowledgement that the war is not going well for their side but that's just supposed to spur the girls on to greater effort.  Kurosawa gets enough into the personalities of these young women to make them human even though from our viewpoint today, what's going on may look tragic. We know now that their efforts went for naught and that the army they were supporting weren't always the most noble or humane of warriors, but confined to this time and place the story works.  At the end Watanabe, the girl who stays up most of the night rechecking lenses because she thinks she didn't inspect one properly, is looked on as the shining example of dedication and sacrifice but in Kurosawa's hands she's as much person as symbol.

Then again he may have other reasons for making that character shine. Watanabe is played by a young woman named Yoko Yaguchi who became the off camera spokesperson for the actresses and constantly squabbled with the director during the filming. Just like an old romantic comedy, this bickering led to Kurosawa and Yaguchi marrying in 1945. They were together until her death forty years later. 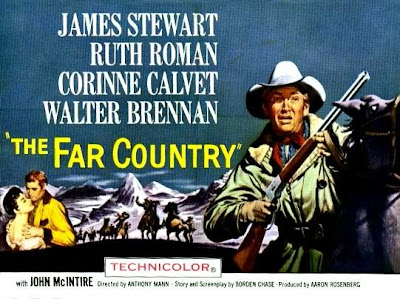 This is the fourth in the series of Western collaborations between James Stewart and director Anthony Mann but it lacks something of the dark edge of their other films together.  Stewart plays Jeff Webster, a cowboy who drives a herd of cattle into the Yukon territory with his partner played by Walter Brennan and runs afoul of a crooked lawman named Gannon who steals gold mining claims from prospectors in a small mountain town.  Stewart's character is constantly out for his own interest even when he sees the townspeople bullied by Gannon but as you might expect he comes around in the end.  The character is supposed to be a hard-bitten type but oddly Stewart does not play him that way.  He plays the role quietly with little of the mean edge he brought to Winchester '73 and the other Mann westerns. Also the role of the villainous judge is played by John McIntire,  who comes off slippery enough but without a really mean edge.  In addition there's not a lot of complexity to the plot.  It's pretty obvious how things are going to play out as the movie runs, even to the point of having the movie's "bad girl" get fatally wounded helping Stewart during the climactic shootout.

As usual for 50's studio Westerns there is a huge number of familiar faces in the cast.  Brennan, Jack Elam, Royal Dano, Harry Morgan, Jay C. Flippen, Robert J. Wilke and Ruth Roman all play various supporting characters. Corrine Calvet is a bit grating as an ingenue with a pouty French accent. It's a good, professional Western but misses the drama of some of its contemporaries. 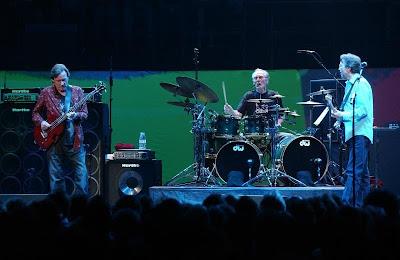 When I first started listening to rock music in 1970, one of the first groups I got into, along with Procol Harum and Traffic, was Cream.  I loved everything about the group, the speedy complexity of the music, Jack Bruce's barking vocals and Eric Clapton's whining guitar.  By the time I heard them they had already broken up but I still got all of their records (I'm proud to say I still own my old vinyl copes of Disraeli Gears and Wheels Of Fire) and they were my entry point into British jazz and jazz-rock. From Cream I went to Jack Bruce's solo records to Colosseum, the Soft Machine and the other Canterbury bands. Then I went on  from Keith Tippett and the Brotherhood Of Breath to John Surman and Mike Westbrook and so on.

I was happy to hear in 2005 that they were getting back together for a reunion concert at the Royal Albert Hall, the same place they had played their farewell show thirty-seven years later.  I waited for the CD of the concert to come out but by the time it did, I never got around to buying it.  I've finally seen the film of those reunion shows and after a couple of numbers I began to remember why I loved this band so much.

The three members, Clapton, Bruce and Ginger Baker, of course were older, their tempos were slightly slower than before and Bruce couldn't hit all the high notes he once did, but their musiccal prowess was  greater than ever. They locked together on all their old blues and rock standbys like a speeding engine, Clapton fireballing, Bruce nimble on the bass and Baker a pistoning rhythm machine.

The film moved back and forth over the four nights of their May 2005 engagement and the trio played almost all of the old songs from their records. "Tales Of Brave Ulysses" and "I Feel Free" were missing but "Politician", "Sweet Wine", "N.S.U.", "Born Under A Bad Sign", "White Room" and all the rest were there. There were even a few surprises in songs they seemed to have never played live before, like Clapton's "Badge", his feature song from their final album, "We're Going Wrong", a moody Disraeli piece they worked into a swirling live epic and incredibly "Pressed Rat And Warthog", Baker's deadpan recitation of a Lewis Carroll-like nursery rhyme.   Even Baker's infamous drum feature, "Toad", was called out. He paced himself more than the old days as he went around his kit, working in African rhythms and making sudden tempo changes, but still came to a wild climax.

Jack Bruce's voice may have lost a bit of range but it was still powerful and Eric Clapton reminded that he has matured into a great singer in his own right when he traded verses with the bassist. This show also proved something to me about Eric Clapton. Hearing his old hits like "Pretending" and "After Midnight" over and over on classic rock stations it's easy to take the guy for granted but hearing him peal out spellbinding solo after solo here, you're suddenly reminded he's one of the greatest rock guitarists of all time. His slow blues solo on "Stormy Monday" here is amazing. After that number Bruce tells the audience what a privilege it is to play with Clapton. You know he meant it.

The show ended with an encore of their biggest hit "Sunshine Of Your Love" winding off into a long jam. In the interviews in the DVD Clapton mentions how he'd like this revival to keep going and have Cream even play some dates in America.  It's now been eight years since those concerts and though, theoretically the three guys could still get together again, it now looks as though that reunion was a one time thing.  Still from the recorded evidence Cream's return to the Royal Albert Hall was incredible.

Posted by Jerome Wilson at 7:21 PM