Movie Roundup # 21: They Can't All Be Winners 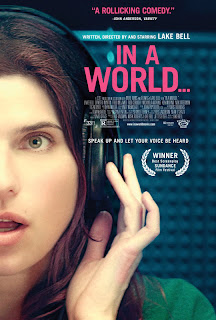 I've ended up seeing this movie twice, once alone and once with other people, and I'm still not sure how I feel about it.  It bothered me the first time but when I saw it again it seemed a little better but I still wasn't all that crazy about it.

The film tells a familiar story of female empowerment in an original setting. Lake Bell, who also wrote and directed the film, plays Carol, a woman who works as a voice coach for actors but aspires to do voiceovers for movie trailers, a job where her father is a legendary figure. When another top voice man gets sick and can't make a recording, she gets a chance to do the work and soon gets more trailer gigs and is up for doing the trailers for a high prestige "Hunger Games" like series of films.This is not even mentioning the subplot about Carol's sister cheating on her husband that seems to be thrown into the mix for no good reason.

It goes by  pleasantly enough if you accept the premise but I couldn't get too much into it. Bell delivers her dialogue in a mumbling stream-of-consciousness fashion mumbled lines that seem to be meant as funny but doesn't work. The character of Carol herself comes off really diffident and whiny and hard to relate to. She is not as bad as the queen of whiny comedy heroines, Diane Keaton's Annie Hall, but she's distressingly close.

Also, I realize this is just a generational problem on my part (I'm old enough now to have those.) but it bothered me that Carol and Louis, the sound engineer who becomes her boyfriend, played by Demitri Martin, are adults who dress and talk like high school sophomores.  On the other hand there are a few good jokes about the inner workings of the movie business and there is a genuinely funny performance from Fred Melamed as Carol's blustery, condescending dad. Otherwise I kept thinking how odd the entire plot seems.  I'm not sure how much voiceover work is done for movie trailers today but a lot of the voice work I notice in television announcing and animation is done by women today. Even a place you'd think of as a male bastion, the NFL Network, uses at least one female announcer. Is this entire story even realistic?

Upon its release in 1974 The Night Porter was a big controversial deal but it hasn't worn well. The premise is certainly shocking. In 1957 a former Nazi concentration camp officer works as a hotel porter and when he encounters a woman who had been a prisoner of the camp whom he had a sexual relationship with, they pick up right where they left off.  The problem is that their relationship isn't explored any deeper than that. There are no motivations or psychology given for anything they do. There is just the most superficial of characterization which is what you would t expect in some cheap gridnhouse skin flick but not a prestigious foreign production like this that starred two distinguished actors, Dirk Bohgrde and Charlotte Rampling.

The plot is fleshed out by the presence of other ex-Nazis who want to see Rampling killed because she was a witness to Bogarde's war crimes but he's fallen back in love with her and refuses to give her up.  There are a few scenes of supposed Nazi decadence like Rampling singing some mock-Dietrich ditty at a Gestapo party while wearing only a SS officer's pants and cap but the entire movie just seems drab and a bit silly.  Boagrde and Rampling treat it all with far more seriousness than it deserves.

This movie was director Todd Haynes' love letter to David Bowie and his Ziggy Stardust period.  The story follows a Citizen Kane-like path as a journalist is assigned to find out what has happened to Brian Slade, an flamboyant openly bisexual glam rock icon who ten years earlier had faked his assassination on stage and disappeared when the hoax was discovered.

I was predisposed to enjoy this film since it deals with that early 70's era of showy British glam rock that I grew up on and still love but it did not do a lot for me.  You see flashbacks of the journalist, played by Christian Bale, as a closeted gay teen feeling empowered by Slade's music and leaving home for London and get a sense of what this story means to Haynes.  What you don't get is any sense of drama or purpose in Slade's story itself.  The journalist interviews Slade's old manager (played by Eddie Izzard), his ex-wife (Toni Collette) and an punkish Iggy Pop-like collaborator (Ewan McGregor) but all their stories do is tick off familiar boxes about the lure of fame, sexual experimentation and creative angst. Jonathan Rhys-Meyers, playing Slade  makes a lovely, dark-eyed faux-Bowie but he doesn't communicate any kind of real character.

Haynes does at least know the period's music.  He fills the soundtrack with all sorts of familiar tunes by the popular musicians of the era, Roxy Music, T. Rex, Lou Reed, the Stooges, Gary Glitter and even pulls out deep 70's chestnuts like Andy Pratt's "Avenging Annie" and Brian Eno's "Needles In The Camel's Eye".  Only one figure's music is conspicuous by its absence, David Bowie himself.  For whatever reason The Thin White Duke's songs are nowhere to be found and poor Rhys-Meyers is forced to sing made up facsimiles of "Space Oddity" and other Bowie numbers as well as a couple of grandiose numbers by the forgotten 70's band, Cockney Rebel.

Not hearing Bowie's music in the midst of so many of his contemporaries somehow made his presence stronger when watching this. And that make me reflect that the real man's career has been far longer and richer than Brian Slade's. When Bowie put Ziggy to sleep, he moved on to bigger and better things, the "plastic soul" era of Young Americans, Station To Station, a movie career that has included The Man Who Fell To Earth and Merry Christmas, Mr. Lawrence, the Berlin trilogy with Brian Eno, "Ashes To Ashes", "Let's Dance",  and even a glorious return from his own long silence this year with The Next Day. David Bowie's actual body of work dwarfs the stuff talked about here. As for just being a British movie that deals with the thrill of being young and finding your own musical soundtrack, I remember Quadrophenia and Absolute Beginners as being far more lively examples.

Posted by Jerome Wilson at 5:05 AM