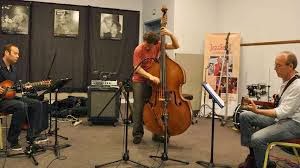 It's always fun to go to a concert not knowing quite what to expect and being pleasantly surprised about what you hear. That was my response to seeing Stephan Crump's Rosetta Trio at Bohemian Caverns last night.
The trio consists of Crump on bass, Liberty Ellman on acoustic guitar and Jamie Fox on electric guitar.  Before last night I knew Crump from Vijay Iyer's trio, had heard Ellman's name in a couple of places and didn't know Fox at all.  Together they played jazz that was flowing and rhythmic in complex lines without distortion or effects. They could be delicate or swing mercilessly. I was reminded of other modern guitar sounds like the clean chording of the late Jim Hall and the thoughtfulness of Ralph Towner. On a lazy blues called "Memphis" Fox even bent a few notes in the direction of B.B. King.
All three men had ample chance to show what they could in solo turns and Crump particularly impressed me with his drive and imagination. Not only does he have three CDs out with this group, he's also done a duo disc with a very different sort of guitarist, Mary Halvorson. I'll love to hear how he deals with her abrasive chords and melodies.
You don;t hear anything about the Rosetta Trio, even in modern "out" jazz circles but they are definitely worth investigating, just one great example of the infinite beauties found in the jazz world today.