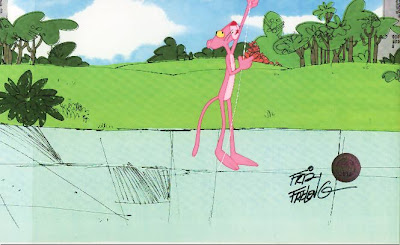 I recently went through the third disc of the Pink Panther Cartoon DVD collection and I was a touch flummoxed by what I saw. The cartoons all looked beautiful from a drawing standpoint but the cartoons themselves varied wildly in quality. Some were funny and some were just odd with a lot of random visual gags that had no flow or internal logic.
After a little Internet digging, I discovered I was watching the last few theatrical cartoons in the series from 1969 and a bunch of the early made-for-TV ones which started up two years later. These were all produced by Friz Freling's company, De Patie-Freling, so it was no surprise that a lot of old Warner Brothers hands like Art Davis, Hawley Pratt and even Robert McKimson, directed these but honestly, the humor sometimes felt like the crappy Warners cartoons of the Sixties. There were oddities like the Panther being a stowaway on board a cruise ship and running away from an attacking deck chair or his taking a pet fish for a walk (!). I'm still interested to see how the series was in its celebrated early days so I put the first disc in the series into my Netflix queue. Friz himself even directed some of those. Hopefully they'll be more coherent.
Posted by Jerome Wilson at 3:40 PM