The Library Of Alexandria 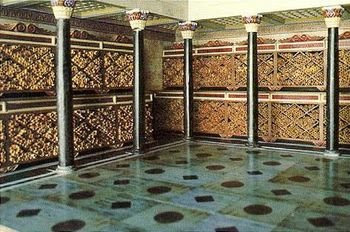 The Library Of Alexandria (seen in an artists' representation on the right) was one of the wonders of the ancient world, a repository of just about all the writings in science, philosophy, history and arts done to that point. A fire destroyed the library and much of the collected knowledge of the world was lost forever.

Today things are very different. Thanks to technology and cyberspace nothing seems to be lost forever, especially anything that can be stored on CD or DVD. A lot of old films may be gone without a trace for the time being but at the same time it seems that weekly some rare or forgotten film or TV show suddenly shows up on the market. From Stan Laurel silents and rare cartoons to 1948 TV shows and legendarily obscure independent films from the 60's somebody somewhere puts it out. The same goes for music.

As a result even chain stores like Blockbuster or Barnes and Noble can be looked on as modern libraries of Alexandria. The humblest of them still hold thousands of different titles and if you look around, there's always something more on the shelves besides last summer's blockbuster movies or the latest disc from some American Idol zombie. That's not to mention what you might find in a place like Netflix or in any of the independent stores that are still around.

From now on that is what I'll be concentrating on in this blog, all the cool pieces of sonic and visual art out there that the mainstream misses out on, at least the ones that strike my fancy. I've been doing this all along but in a really lackadaisical way. From now on I will endeavor to regularly write about the work I come across. Hopefully I can keep this going a while. Whoever reads this maybe I can tell you something you didn't know before, and once I master YouTube, show you a few things as well.
Posted by Jerome Wilson at 4:45 PM