The Silence Of Navarone 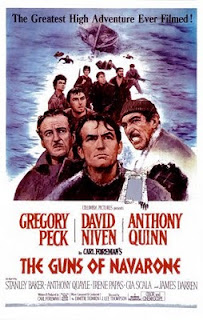 Being snowed in like most of the eastern U.S. the last week, I've passed the time mostly watching a lot of old movies thanks to Netflix, the few DVD sets I have lying around the house and Turner Classic Movies. Something that struck me in watching old 60's and 70's films like The Friends Of Eddie Coyle, The Taking Of Pelham One Two Three and especially The Guns Of Navarone for the first time is how little dialogue there is in some of these films.

Look at Navarone in particular. Long stretches of the film go by without a word of dialogue, which makes total sense since the film follows a group of World War II saboteurs trying to sneak onto a Nazi fortress and blow up a huge gun enplacement. In that setting you would need to keep your mouth shut so the Germans would not find you. If that film were made today by Quentin Tarantino or someone similar, there would be an unending stream of wisecracks and chatter to the point where you'd think the Nazis would have to be deaf not to discover them. In the 1961 Navarone though, only David Niven makes a lot of wisecracks and that is an integral part of his character. They even go to the other extreme with James Darren and have him speak in only two scenes although he is in just about all of the movie. This film is a great example of giving screen characters individual voices and personalities unlike today when every character in an action or horror film cracks bad jokes and is indistinguishable from every other character.
Posted by Jerome Wilson at 7:54 AM

Labels: movies, The Guns Of Navarone