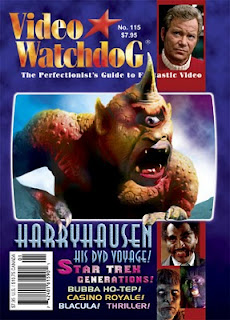 I'm going to start periodically writing about some of the magazines I read regularly that give me my main information and perspective on the arts I enjoy and my first subject is Video Watchdog.

Video Watchdog is a long-lived glossy-covered little magazine published by Tim and Donna Lucas out of their home in Cincinatti, Ohio. It covers the world of "fantastic video", which over the course of 155 issues and counting, has come to mean every type of cult film genre extant, including horror, fantasy, science fiction, film noir, martial arts, spaghetti westerns, animation and softcore exploitation. Tim Lucas, a thoughtful and intelligent critic who has also written a 1200-page book on Italian fantasy director Mario Bava, does a good bit of the writing himself while, Donna, his wife, does the editing.  Other high-quality film writers like Kim Newman, John Charles, Bill Cooke and David Kalat are also regularly featured. The backbone for VW, like most video magazines is the reviews but they also make room for longer thematic pieces, interviews and in-depth looks at DVD collections of the likes of Tarzan and Astro Boy as well as film-related books and soundtrack CDs.

The great thing about this magazine to me is its scope. They cover the obvious major studio releases but also go far afield to do seemingly anything that makes it to a home video format like J-horror (long before the American remakes started), Russian fanasy films, cult TV series like The Avengers, The Prisoner and Doctor Who, micro-budget American indies, Bollywood horror, early Ingmar Bergman, even some genre material that hasn't gotten an official Region 1 release yet. All that and there is still space for the occasional article on maligned directors like Andy Milligan and Jesus Franco or interviews with people who were involved in some of these films like Roger Corman scripter Charles B. Griffith and actress Harriet White Medin.

Every issue of Video Watchdog tells me something I didn't know before whether it's on some movie I've never heard of or a film or TV show I'd run across but previously ignored. All of the magazine's writers, especially Lucas, have a talent for seeing their subjects in a new way and treating even the work they don't care for with respect. Lucas' recent dissection of a notorious European exploitation film from the 60's, Sweden: Heaven And Hell, relating the film to his own memories  and daydreams about seeing it at a Cincinatti drive-in was a particularly strong recent article. Video Watchdog is a remarkably consistent magazine that tallks about the wild genre films of the world with an erudition they rarely receive elsewhere.
Posted by Jerome Wilson at 9:13 AM

Hi, I have been a fan of Video Watchdog, since the beginning. Being a film buff and someone who appreciates the trivial details around most movies, I have also enjoy Tim's attention to detail. Magazines about genre films are rare these days and Video Watchdog is still the best.