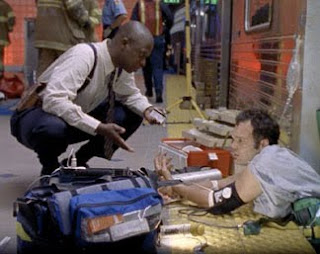 As promised I checked out a little more of Homicide: Life On The Street and got even more of a feel for how special that show was. It's like no other American network TV cop show I've ever seen. It shows a world of grays, where even the "good guy" cops can guess wrong investigating a crime or do bad things and criminals sometimes go uncaught even when they admit to their guilt.
I watched the first four shows of Season 6 by which time the cast had changed drastically from the Season 2 shows I watched earlier. Richard Belzer, Andre Braugher, Clark Johnson, Kyle Secor and Yaphet Kotto were still there but old heads Ned Beatty, Daniel Baldwin, Melissa Leo and Jon Polito were long gone, replaced by younger actors whom I, in my limited modern TV watching, have not seen elsewhere. By this time the show was also in the midst of a long-running storyline about a drug kingpin and the revenge his family takes when he is killed by the police.  In the best of the shows I watched, though, that plot did not even appear. The episode was called "The Subway" and a still from it appears above. That's the future Detective Robert Goren, Vincent D'Onofrio on the right playing a man who is pinned under a subway train and has no hope of being rescued alive. The main focus of the show is what you see above, Braugher's character, Pemberton, talking to this man while the fire department works to free him, knowing he only has a few minutes left to live. As you'd expect the tone is somber and quietly powerful. Both actors are great in their roles and the show treats death as something brutally random and inevitabie.

That episode alone shows me why Homicide and its spiritual successor, The Wire, never became quite as popular as shows like Law And Order or The Sopranos.  There were no catchphrases or "cool" characters on this show, just a series of sobering realities and the realization that there are no cut and dried answers in life. It's amazing to me that a program like this lasted on a boradcast network for seven seasons. I don't want to become obsessed with this show and ignore all the other TV and movies out there but I will be checking out more of it every now and then.
Posted by Jerome Wilson at 3:26 PM

Labels: Homicide: Life On The Street