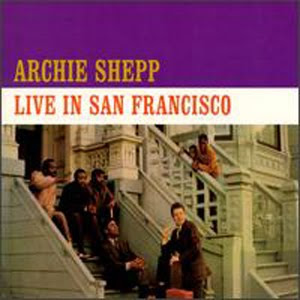 I moved last month which has given me the excuse to dig out and relisten to a lot of CDs I hadn't heard in years. In the case of the above, I'm just now appreciating what a heavy sumbitch it is.

This is Archie Shepp at his firebreathing best live in 1966 in a group that includes Roswell Rudd on trombone, Beaver Harris on drums and the twin bass bottom of Lewis Worrell and Donald Garrett. Shepp and Rudd make a great front line prowling around each other, Rudd's long tones an excellent foil for Shepp's deep hollers.  Meanwhile the rhythm section sizzles. The group's version of Herbie Nichols' "Lady Sings The Blues" is brawny and they approach two Ellington standards with a fine woolly swagger.  The CD version of this album closes with a half-hour free marathon, "Three for a Quarter, One for a Dime" where these then-young firebrands wriggle and smoke in the best 60's tradition.
Posted by Jerome Wilson at 5:57 PM

I would like to exchange links with your site www.blogger.com
Is this possible?