Archie Shepp seems to have cured my writer's block of the past two months so I thought I'd keep things going by discussing some of the films I've seen recently. 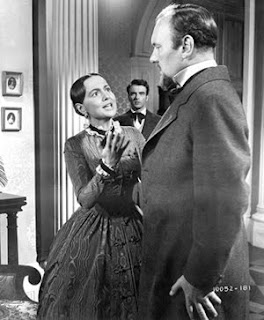 By sheer coincidence I saw two films over the weekend that both received acting Oscars and dealt with seriously dysfunctional families (which is a popular subject for award winning movies, come to think of it.
The first was The Heiress (right), a 1949 Henry James adaptation that starred Olivia DeHavilland as a mousy spinster who finds love with a young man played by Montgomery Clift who seems to be really after her money.
DeHavilland justly deserved her award as she takes her character through a convincing journey from awkwardness to joy and finally to hardened disillusion, but I was just as impressed by the great Ralph Richardson as her father playing his part with a beautifully understated mixture of cruelty, shame and smothering love. He's a monster but one you ultimately feel sorry for. Hopefully he at least got a Supporting Actor nomination for this work. 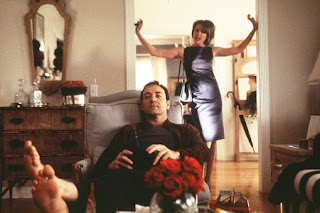 Then there was a much more recent picture about a miserable household, American Beauty. I appreciated the craft of this film and thought that Kevin Spacey's work was certainly Oscar-worthy but something about it left me cold. There were innumerable plots and subplots going on with almost every major character having some kind of dark secret. That wouldn't be bad if there hadn't already been a small army of films and plays about the repression and dark side of suburban life over the last fifty or sixty years.  There isn't much here that hasn't been said more coherently and powerfully a dozen times over. Also the closing thought that the daughter in the film and her boyfriend will be making their way in the world by selling pot creeped me out a bit.


Wanting to be creeped out was the reason I bought another Mill Creek 50 movie DVD package, Horror Classics. That hasn't happened so far. There are a few bondafide classics in the set like Night Of The Living Dead and Nosferatu but all I've sampled so far have one of Boris Karloff's Mr. Wong mysteries and something called Revolt Of The Zombies. 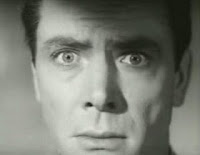 This was a 1936 movie by the Halperin Brothers that was a supposed sequel to their legit horror classic, White Zombie, that starred Bela Lugosi as a Haitian zombie master named Murder Legendre. Only this time the "zombies" were an army of hypnotized soldiers in 1930's Cambodia. An expedition of scientists went there seeking the secret of zombification and they included a sinister chap in a black silk outfit, played by Roy D'Arcy, who would seem to be this film's version of the Lugosi villain except he is killed halfway through by a young Dean Jagger (above) who seems to want to control zombies and take over the world simply his girlfriend left him for a more macho guy.
Looking at that picture can you blame her? Not exactly the evil mastermind type, is he?  The producers obviously realized that because in closeups where Jagger is supposedly controlling the zombies, they throw in a shot of Lugosi's eyes from White Zombie.

Now those are creepy eyes.

What this movie really boils down to is a drawing room melodrama stuck inside an ill-fitting monster movie framework. Hopefully the rest of the movies in the set will be a lot more fun.
Posted by Jerome Wilson at 6:04 PM

Labels: American Beauty, film, Revolt Of The Zombies, The Heiress

Amiable fill someone in on and this mail helped me alot in my college assignement. Thanks you on your information.

With debt credit rating loan consolidation, your financial obligations are being combined in a single record plus your psychologist is going to take care of each of the dealings with the banker. You simply won't ought to prepare split investigations each of your respective debt collectors, an individual sticks ought to allow the full quantity of a person's monthly bills for a consultants along with your psychologist will pay down your creditors.