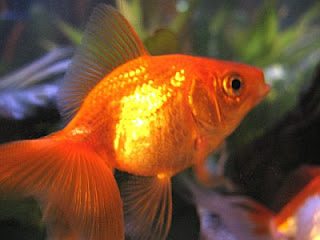 I watched a couple of very good films over the weekend, Hunger, about IRA hunger strikers in Northern Ireland in the 1980's and Antares, an Austrian drama that told three interlocking stories about tenants of a large apartment house, yet the image I can't get out of my mind is of a damned goldfish swimming across my TV screen. 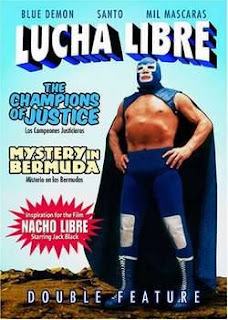 You see besides those two, I also watched a couple of Mexican wrestler movies. These are the action films that were made for decades where actual masked Mexican wrestlers like Santo, Blue Demon and Mil Mascaras ran around acting like superheroes, fighting crime and righting wrongs fully masked as well as wrestling in the ring. As wacky as the premise was, especially since these guys never took their masks off whether in business meetings, hanging out at the beach or sleeping, the two movies I saw, The Champions of Justice and Mystery In Bermuda, didn't impress me all that much. They looked embarrassingly cheap, particularly Bermuda where Blue Demon and his buddies mostly just threw would-be assassins around hotel rooms before disappearing into the Bermuda Triangle (No kidding. That is how the movie ended.)

Champions had more going for it with the group fighting a mad scientist and his army of evil wrestlers and super-strong red-suited midgets as he kidnapped beauty contestants for some vague evil scheme. There was more action in this one but it's hard to get that excited when one of the big fights takes place in a quiet grassy field presumably because the producers didn't have the money for a decent set. There was one moment though that was so lame it buzzkilled the entire movie for me. At one point a couple of the wrestlers were having this fierce underwater fight with a couple of frogmen. The camera was positioned underwater to show them battling and as they were going at it, a small goldfish wiggled by in the foreground.

I'm not an expert in marine life but somehow I don't think there are goldfish in the Gulf of Mexico. They shot the bloody scene through a fishtank! I don't mind low budgets but that one got to me. I don't know if any of the earlier wrestling movies that involve mummies or werewolves are any better, but after that I'm in no hurry to do further investigations of the genre.

Posted by Jerome Wilson at 4:46 PM