I slack off far more than I should when it comes to acknowledging artists important to me who have passed.  The past week or so has seen the deaths of Frank Foster, long time Count Basie saxophonist and lyricist Fran Landesman who wrote some of the most literate standards out there including "Spring Can Really Hang You Up The Most" and "Ballad Of The Sad Young Men".  The one I really had to mention, though, was Eugene McDaniels. Like a lot of musicians in the Fifties and Sixties McDaniels' career went through breakneck changes.  He started out in gospel at a young age and matured into a jazz singer working in Hollywood clubs. Then he was signed to Liberty Records and had a successful stint as a pop singer with several Top 40 hits including two songs I've always loved, schmaltzy arrangements and all, "Tower Of Strength" and "Point Of No Return".

Then as the Sixties went on, his pop hits dried up and McDaniels, like so many others, started looking around him and writing about the turmoils of the world, trading in his lounge style for nasty soul-funk-jazz that fit right in with the era of Sly Stone, Gil-Scott Heron, George Clinton and Bitches' Brew. 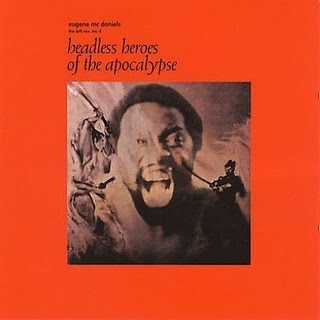 As Eugene McDaniels, he released two albums in this style for Atlantic, Outlaw and Headless Heroes Of The Apocalypse.  I've never heard Outlaw
but I know Headless Heroes and it is strong, strong stuff that takes on racism, war, and the plight of the Native American to the tune of slick, head nodding rock-flavored funk.  The record was so strong that according to legend the Nixon Administration leaned on Atlantic to bury it.  Today it's known mostly to funk connoisseurs.

In the few obituaries I've read for McDaniels so far, this stuff isn't brought up except to mention the names of his albums. His pop hits and the fact that he wrote one of Roberta Flack's big hits, "Feel Like Makin' Love" are cited but nobody seems to bring up that he wrote several songs for Flack's early records,  including the most well-known song McDaniels ever composed. Flack's version of that song is really obscure though. The famous one was a live recording by Les McCann and Eddie Harris from the Montreux Jazz Festival, a song called "Compared To What", and miracle of miracles, that recording has turned up on YouTube...