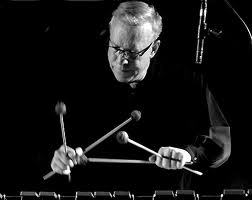 I've known about the music of vibraphonist Gary Burton for many years but tonight was the first time I ever got to see him perform live.  Burton has been a long time innovator, both with his technique of playing with four mallets at once and in his mixing of other genres with Jazz, notably country and rock.  He's been around for a long while and it's stunning to realize he is 68 years old. With short blondish hair and glasses, he looks a good twenty years younger than that. Then again, with all the octogenarian Jazzers out there still kicking butt like Ornette Coleman, Lee Konitz, Sam Rivers, Roy Haynes and Sonny Rollins, I guess Burton is still a relative kid.
I saw him at Blues Alley tonight in the quartet format he has favored for most of his career. Actually watching him play with four mallets was a fascinating experience with the dexterity he showed in being able to hit different notes simultaneously with a bright rhythmic flow and even use only three mallets at a time with the fourth jammed in his fist but not touching the keys. Of his bandmates, bassist Scott Colley and drummer Antonio Sanchez were both excellent but the real eye opener was guitarist Julian Lage, a 23-year-old former prodigy that Burton has been playing with for ten years. The young man played with fire, passion and rock-influenced dexterity much in the tradition of former Burton guitar players Larry Coryell and Pat Metheny.
As good as Lage was Burton's playing was the real revelation for me. Half of the group's set was spent doing tunes from their latest CD but the rest of the time they played familiar pop and Jazz standards. Burton is known for all the non-jazz musics he has dabbled in over the years, like country and rock in the 60's, tango and Spanish music in the 70's and his contributions to ECM's classic airy, hovering aesthetic with albums like Crystal Silence with Chick Corea. Tonight he showed he can play straight-down-the-middle Jazz with real swinging drive as he did "Afro Blue", "I Hear A Rhapsody" and Thelonious Monk's "Light Blue". The encore was Milt Jackson's "Bags' Groove" which was bluesy as all get out and struck me as a little poignant. Here was one of the great living masters of the Jazz vibraphone doing the music of a departed master as soulfully as the dour-faced Jackson himself might have played it. It was a great show and I'm glad I went.
Posted by Jerome Wilson at 8:40 PM