I don't blog that often as it is but last week's Natural Disaster Double Feature temporarily stopped me from even thinking about writing anything. I will finish off my Top 10 Songs list soon but first I want to get to some long overdue thoughts about modern TV comedy, one show in particular.


I got out of the habit of watching regular network TV a long time ago, particularly comedies. The only comedy series I've really enjoyed in recent years have been the animated Aqua Teen Hunger Force and the Canadian import, Corner Gas. Nothing else has much appealed to me, especially the highly touted shows that many people call the TV milestones of the last twenty years. Sex And The City was ample proof how unsexy shallow, overdressed women can be. The few times I watched Friends I was creeped out. All I saw was adults behaving with the emotional maturity of eight-year-olds but crayying around grown-up libidos. Seinfeld just felt stale to me like a reheated casserole of all the New York-based sitcoms of the Sixties and Seventies, only nowhere near as spontaneous or funny.  The couple of times I've watched Curb Your Enthusiasm it almost gets there with amusingly absurd situations and a lot of genuinely funny guest stars like Wanda Sykes, Bob Einstein and Richard Lewis. My problem with that show though is Larry David himself. With his one-note delivery and hectoring voice, the man is a black hole for comedy, a place where funny goes to die, but he's the second coming of Buster Keaton compared to the star of the current hit sitcom I recently endured two episodes of...
﻿﻿﻿ 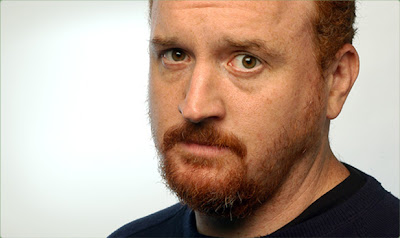 Yeah, this poor bastard, Louie C.K.
What I've seen of his show, Louie, is well put-together and acted but I'll be damned if I can see where it's a comedy.  The character of the put-upon loser is a long-standing comic archetype, one Chaplin, Keaton, Woody Allen and many others have worked beautifully but all of those characters had some element of hope or fight in their makeup that made you empathize with them. In the two Louie episodes I saw, one where he spends an afternoon with an old girlfriend and one where he debates a young woman who discourages masturbation, Louie just comes off as a beaten-down dog, somebody dragging himself through the world with virtually all hope gone, the kind of guy who'd be right at home sharing a beer with Willy Loman in Harry Hope's Saloon, the setting of The Iceman Cometh. He seems so miserable you'd expect that the last episode of the series will end with the sight of Louie putting his neck in a noose or holding a gun to his head.
Maybe Louis C.K. is a brilliant standup comic but this show is more tragedy than anything else. I'm amazed anybody finds this funny. I love dark material but for me, this is too realistically depressing to be entertaining. There are still some TV comedies out there I'd like to explore like Parks And Recreation, Community and 30 Rock.  Hopefully some of them are actually funny once in a while
Posted by Jerome Wilson at 5:22 PM