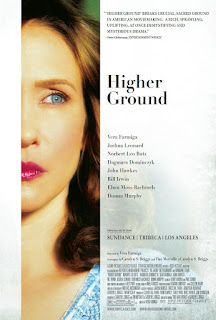 In my last post, I mentioned that I would be seeing a certain 2011 movie soon that could turn out to be the most moving film I'd see for the entire year.  I was right.

The movie is question is called Higher Ground. It starred and was directed by actress Vera Farmiga and it is based on a memoir about a woman searching for her faith.  Quite simply, the lead character, Corrine, gets baptised when she's a little girl, mostly because it's expected of her. She grows up, gets married and settles into a close-knit evangelical Christian community with her husband and children where the formal trappings of the church are replaced by a more communal atmosphere where peole hold worship groups in each others' homes, everybody wears blue collar working clothes to services and the pastor is called by his first name. The community seems conservative but not fanatical or bigoted while Corrine comes to feel restless and out of place, never getting the deep-seated feeling of God's presence that her husband and friends do. She eventually draws away from the community, leaves her husband, explores the larger world of literature and thought and by the end of the film, she is still waiting to feel God in her life.

This story is very simply and powerfully told. My synopsis left out all the ways Corrine and other characters, like her best friend in the community, Annika, come off as well fleshed-out and believable characters.  As a actress Farmiga draws a haunting portrait of a woman slowly growing into her own person wihtout finding any answers or audience-pleainsg big revelations.  Religion is not ridiculed in this movie. It is treated as something that is an important foundation of people's lives, even as the lead character seeks her own peace but never finds it.

All this explains why the film has been so overlooked in the end-of-year lists.  A woman searching for God isn't anywhere as sexy a topic as sexual addiction or the end of the world.  That the Oscars overlooked it is no surprise (though in a perfect world Farmiga would have nailed a Best Actress nomination at the very least) but in all the should-have-been nominated blog pieces I read, only Roger Ebert, who has become understandably philosophical in recent years, brought this film up.  Even the so-called "anti-Oscars", the Independent Spirit Awards, ignored it.  A story about an honest search for religious fulfillment with no villains or stereotyped characters is obviouvlsy too strong and scary for a lot of people. Sadly, Higher Ground may be one of those movies that sits around unnoticed for several years until someone runs across it on TV and writes an article about how good it is. It'll be a great movie ten years from now and it's a great movie today.
Posted by Jerome Wilson at 1:35 PM