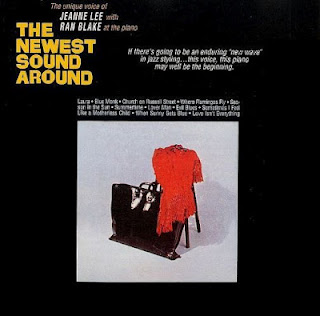 Ran Blake is one of my favorite pianists, a man whose playing is a singluar blend of dissonance, blues and film noir elements. Over a fifty-year career he's mostly played in solo and small group settings but some of his greatest work has come when paired with female singers. He's worked with Chris Connor, Christine Correa and Dominique Eade over the years but his most remarkable duo work came on his very first recording, The Newest Sound Around, where he was paired with his fellow Bard College classmate, Jeanne Lee, who was also making her first recording.

From the first notes of the opening track "Laura" it's obvious this is something special. The dark sensuality of Lee's voice and the icy, clipped notes of Blake's piano create a memserizing effect, attractive and unsettling at the same time. Their version of "Blue Monk" may be the best example of their partnership. Blake goes into the tune with a rattling, alienating strangeness but when Lee brings her velvetly voice in, the oddity gets a human dimension and turns into a downbeat melancholy. Much of the rest of the session, like "Where Flamingos Fly" and "When Sunny Gets Blue" comes off equally ominous and delicate but there are other facets in the work. Blake's solo piece, "Church On Russell Street" is charging gospel piano with a strong Gershwin-like melody, Lee's acapella versions of the traditional "Motherless Child" and "He's Got The Whole World In His Hands" are pure spun beauty and there's even a little frivolity on a Fran Landesman song "Season In The Sun" when George Duvivier joins in on bass and the solemn duo momentarily becomes a frisky jazz trio.

This record orignally came out on RCA in 1962 and has been revived a couple of times in the CD era. I first bought it when the format first came around and RCA reissued a whole slew of their jazz rarities on disc. Like a lot of older jazz sessions that have fallen into public domain lately, it's just been reissued, this time on a Spanish label, Solar, and with a nice bonus, some 1963 Blake and Lee live tracks from a concert in Germany that have never been released before.  These sound a little rough but still can be clearly heard. The highlights of this section are a gospel waltz version of Cannonball Adderly's "Sermonette",  a dramatic but lively Blake solo piece called "The Outcast" I'd never heard of before and an arrangement of the song "Round About" with a lilting carousel-like theme that foreshadows Blake's later masterwork "The Short Life Of Barbara Monk".

Altogehter The Newest Sound Around is a singular classic of voice and piano blending in a way no one has quite been able to match in the fifty years since its release.  It's a masterpiece that deserves to be far better known than it is and it's good that it's finally available again.

Posted by Jerome Wilson at 1:16 PM