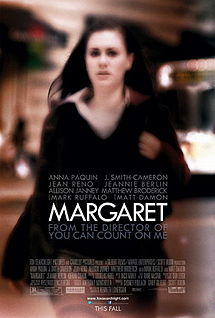 Even in this "everything comes out eventually" era, once in a while there's a film that its studio dislikes for one reason or another, resulting in its sitting on a shelf for years before a token run in a New York theatre for a week or two and an anonymous DVD release.

The film Margaret was almost one of those. Sitting in the Fox Searchlight vaults since 2007 because the studio and Kenneth Lonergan, the film's director kept squabbling about its length and Lonergan's difficulties in coming up with a finished cut, it did finally get released in New York in September 2011 and that would have been that except some critics saw the film and were impressed enough to make it a cause celebre in the film press and get it more exposure. It did eventually some acclaim and made a few critics' "Best of 2011" list. It's finally getting a wider release now and my personal opinion is...eh.  In a lot of ways this feels like the airless film about self-absorbed West Side New Yorkers that Woody Allen and Noah Baumbach are always accused of making.

The main thrust of the film concerns a 17-year-old prep school girl, Lisa, who is involved in a bus accident that results in a woman's death.  The woman was run over by a bus whose driver had been distracted by Lisa.  The woman literally dies in her arms and although she at first tells the police the woman was at fault, she becomes consumed with her own guilt and obsessed with making the bus driver legally responsible for the death.

Anna Paquin plays Lisa and she really conveys her confused senses of guilt, loneliness and outrage well.  When the movie concentrates on this main plot everything works fine.  It's all the bizarre tangents and parallels that drag things down.  Lisa's parents are divorced (naturally) and she lives with her mother, a stage actress who is starring in a hit play and is dating a Colombian businessman.  The mother-daughter estrangement angle is understandable but there seems to be too much time spent on Mom's dates.  As for Lisa herself, when she isn't haranguing police and lawyers about having the bus driver fired, she spends her school time getting in political arguments with a Syrian-born student and having very casual sexual encounters with a classmate she barely talks to and one of her teachers.  There are also some random background statements about the arbitrariness and mystery of existence that further confuse the issues.

All these elements could be part of a compelling movie but they feel poorly organized here.  Lisa comes off selfish, unsympathetic and sometimes so arbitrary you wonder if she might need a therapist.  Paquin is excellent but Lisa is not someone I'd want to watch for two and a half hours. Her character reminds me somewhat of an even more unsympathetic woman Sigourney Weaver played in a 1999 film nobody knows called A Map Of The World. There Weaver portrayed a cold, hostile woman wrongfully jailed for child molestation.  Her frostiness was compelling because it came from a grown woman whose inability to communicate with others seemed a lifelong tragedy.  Paquin's moods come off just come off as the petulance of a spoiled kid.

The acting is really good all around. Paquin, as I said, is convincing and there are also good turns from J.  Smith Cameron as her mother, Jean Reno as Mom's beau, Alison Janney as the accident victim and Matt Damon as the teacher who gets lucky.  Matthew Broderick also appears as another teacher but I have no idea why he is even in the movie.

In the end the film did need a good editor.  Martin Scorsese and Thelma Schoonmaker, no slouches, contributed to putting this version togetrher but making a coherent whole out of all this seemed even beyond their powers.  Not every unseen film is a suppressed masterpiece.
Posted by Jerome Wilson at 4:36 PM