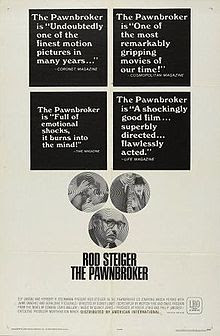 When I was a child in the 1960's I'd pay attention to the big important movies of the day. I was too young to actually see any of them but I'd follow TV reviews, particularly on The Today Show, and the annual Oscar telecast.  That's how I heard about films like Breakfast At Tiffany's, Days Of Wine And Roses, Never On Sunday, The Hustler, Lawrence Of Arabia and many more.  Catching up with some of those films in recent years, sometimes I'd be left wondering what all the fuss was about. Other times I'd run into something that more than lived up to its reputation. I've just watched The Pawnbroker and it's definitely in the second category.

This film, directed by Sidney Luemt, stars Rod Steiger as Sol Nazerman, a Jewish concentration camp survivor who lost his entire family in the Holocaust and now runs a pawnshop in Harlem. The trauma and guilt of his experiences has caused Nazerman to psychologically withdraw from the rest of humanity.  All day in his shop he deals with people at the end of their rope selling off bits of their lives and does not display an ounce of compassion or mercy.  Encounters with his shop assistant, a well-meaning social worker, a local gangster he does business with and others cause him to have flashbacks about his time in the camps, breaking through his defenses and making him eventually come face to face with his inability to feel anything.

Steiger, a classic scenery chewer if there ever was one, puts on a remarkable show of being totally suppressed and devoid of emotion throughout most of the film, which make his silent cries of despair at the end much more powerful. He was 39 years old when this came out but he was completely beliabvalve playing a man 20 years older, his natural robustness becoming a sagging, stoop-shouldered burden.  Given his roaring performances in other films, it's a revelation seeing him like this and he was probably helped along by being directed by Sidney Lumet who really gets his signature New York grittiness going here.  It is pariticularly notable the way he has Nazerman constantly framed by cages and fences in many shots reflecting his internal isolation from the world, notably the rat's nest of wire fences in the pawn shop itself.

The film tunred out to be significant in several ways.  Released in 1964 it was the first American film to deal directly with the Holocaust.  Also it broke ground by including frontal female nudity in a crucial sequence that was denounced by both the Catholic Legion of Decency and the Motion Picture Association of America.  For all that you rarely seen anything about this movie anymore.  Holocaust movies have practically become a punchline in recent decades and when Rod Steiger's name is mentioned,  On The Waterfront and In The Heat Of The Night are brought up way before Pawnbroker.  The actor was nominated for an Oscar for his performance but he, along with Richard Burton, Laurence Olivier and Oskar Werner, lost to Lee Marvin for the comedy Cat Ballou in what now looks like one of those inimitable, head-shaking, "What were they thinking?" Oscar moments. The Pawnbroker does not deserve to be lost to history. It is a powerful film with a remarkable central performance.
Posted by Jerome Wilson at 8:08 PM