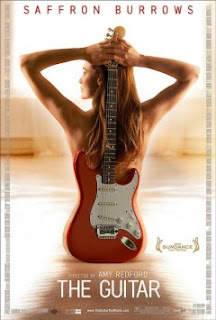 On its own merits The Guitar is a fine little film, a story about a woman finding her true passion in life after she's been diagnosed with a terminal disease.  It's no fault of its own that it comes up a little short when compared to a certain classic Japanese film with a similar premise.

The Guitar stars Saffron Burrows as Melody, a New York woman who is told by a doctor that she has inoperable cancer and has only two months left to live.  The same day she subsequently loses her job and is kissed off by her boyfriend, leaving her in a suicidal state of mind.  She doesn't kill herself though. She instead decides to spend her remaining days living it up. This means moving into a huge loft apartment and using her credit cards to buy everything she wants, new clothes, new furniture and especially her childhood fantasy toy, a red electric guitar. She does all this without ever leaving her apartment, having all her meals delivered to her. The only people she comes in contact with are the parcel delivery man and a girl who delivers pizzas and she ends up having affairs with both of them.  She lives out her time blissfully in this environment but then something unexpected changes everything...

As I said this is a charming and uplifting little movie in and of iteslf,  but after watching it I couldn't help but think of another film about someone who was dying of cancer and had to decide how to spend the rest of his life, one of my favorites, Akira Kurosawa's Ikiru.

Ikiru stars Takashi Shimura as a middle-aged government clerk who is the recipient of the bad news. Like Burrows' character, he's alone in the world. His wife is dead and he's lost contact wiht his children. His first impulse is also to live it up and he spends much of the first half of the film on a drunken trawl through Tokyo night clubs but he eventually realizes he should finally accomplish something in his life so he spends his last weeks pushing the paperwork through the city bureaucracy to convert a swampy slum area into a decent playground for children, not exactly the same as shutting yourself up with a guitar and making whoopee with the delivery people.

To be fair, Kurosawa's film was made in a very different culture than The Guitar.  That was done in post-World War II Japan,  a country that had just undergone the shame of losing a war and the trauma of seeing two of its cities incinerated by atomic bombs.  Also Kurosawa was known to pay homage to self-sacrifice and nobiilty in his films. It's no surprise then that in his story, the best way to spend the end of one's life is by helping others.

21st century New York is a very different place of course. The overriding impulse in The Guitar's world is if you've got to go, have as much fun as you can on the way out.  To be fair I can't think of one American film with a termainally ill character that doesn't have that philosophy.  Here though there's an uncomfortable air of self-absorption throughout the movie.   There are flashbacks that show Melody as a child becoming bewitched by a red guitar in a music store and stealing it when she gets the chance but nothing that suggests she ever thought about actually working and saving money to buy a guitar as she got older. At the end of the film Melody has lost all her new possessions, is completely cured and happily playing her guitar on stage in a band. She's living her dream but so what?

And yes I said "completely cured".  By the end Melody is completely cancer-free and the implication is that the tumor disappeared simply becasue she was finally enjoying herself.  I realize there's a bit of the fairy tale to this movie but that is really a little much.

Despite all this I really enjoyed the movie, mostly because of Saffron Burrows. She's such a vital human presence, scared and vunerable then slowly growing in confidence throughout the movie that I couldn't help feel something for her plight.  It's only after the movie was over that all the "Hey, wait a minute!"s started forming in my head and I realized how selfish her behavior was.  I guess you only have to believe in a film for the duration that you're watching it.  Besides if I found out I only had a short time left to live, I probably wouldn't think much about other people either.
Posted by Jerome Wilson at 4:29 PM