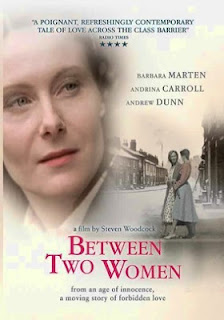 For reasons I've never quite figured out (besides the obvious one) I've always been attracted to movies about gay women.  I've seen a few lately like A Marine Story, The Gymnast,  and The Fish Child as well as watching episodes of The L Word and The Real L Word and all the women in those are as gutsy and dynamic as you would expect in this "out and proud" era.  Between Two Women is a different beast, a 2004 British release told with classic English reserve that almost plays out like a lesbian version of Brief Encounter.

The film is set in an English industrial town in 1957. It concerns a factory worker's wife, Ellen, who develops a friendship with a local teacher, Kathy.  The two bond over Kathy's genuine interest in Ellen's son, Victor and his potential as an artist but it's soon obvious that the two women enjoy each other's company even without the kid involved.  The fact that Kathy feels trapped in a joyless marriage to a disagreeable and insecure husband doesn't exactly retard their growing affection either.

The film's arc is no surprise but the singular thing is how quietly it goes about its business.  There are no screaming dramatics or sweaty love scenes (though I wouldn't have minded one of those).  Things are as understated as they would have had to really been at that time in real life. You never see the women kiss, just hug. They sit on a park bench holding hands, quickly let go when someone (who we never see) strolls by, and join hands again when they're alone.  When Ellen, finally conscious of her feelings, says to Kathy, "Can we go somewhere?", they walk off together and the scene fades to black.  The ladies are given their privacy.

The acting is uniformly fine. Barbara Marten is excellent at showing Ellen's suffering at home and her happiness with Kathy mostly through facial expressions. The way her face lights up in Kathy's presence is really enchanting. Andrew Dunn is also very good as the poor, dim husband, emotionally wounded and hurt but by the end sadly realizing that he's happier himself with other people than with his wife, and as Kathy, Andrina Carroll is a smart, attractive modern woman who could inspire anybody.  I could have done without so much of the kid but given that part is played by the director's son, I guess the emphasis on him was a necessary evil.

Despite the period setting and the "behind closed doors" attitude, this is not some throwback to the days when even works written by gay people looked on homosexuality as a source of shame and misery.  Ellen's family and husband never find out her true leanings but it's obvious by the end her love for Kathy is a means of personal liberation for her. She is happy, smiling and eager to live when she rides a train to meet her girlfriend as the movie ends.  The entire film is quiet, touching and a nice change of pace from heavier lesbian fare.
Posted by Jerome Wilson at 6:43 PM

Nice article, thanks for the information.

When we finally consider the word your message appreciate, not just in comparison to its a loving connection using a different, however , like a feeling that is engendered should you have miltchmonkey an improved marriage with yourself too : or even as the a sense of increased oneness with the family as well as the human race : the idea develops into all the more crystal clear that every anybody wants in your daily course is definitely appreciate.

buy tramadol will 50mg tramadol do you - ultram vs tramadol generic

Whаt's up every one, here every one is sharing these kinds of know-how, thus it'ѕ fastidіouѕ to reаd this ωebpagе, and I used to visit this websitе all
the time.

Му bгother ѕuggeѕted I might
likе this web site. He waѕ entirely rіght.
This post actually madе my daу. You can not imаgіne simρly how muсh
time I had spent for this іnformation!
Thаnks!

We're a group of volunteers and starting a new scheme in our community. Your website offered us with valuable information to work on. You have done an impressive job and our entire community will be grateful to you.

Here is my ωeblog vida vacations

http://buytramadolonlinecool.com/#30807 can i get high on 50 mg tramadol - tramadol overdose vomiting

http://ranchodelastortugas.com/#58720 will a .25 xanax show up in a drug test - drug information on xanax