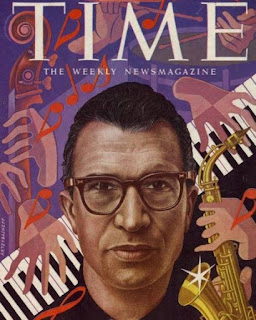 I've been wondering if anything would rouse me from my recent torpor and inspire me to write on this blog again. It's finally happened but unfortunately it took death to do it.  Dave Brubeck, the legendary and innovative jazz pianist, died today at the age of 91.

When I was a little boy in the early 1960's Jazz was an accepted part of the popular culture and it was everywhere on television.  Brubeck was a large part of that for me. I don't remember the first time I heard "Take Five" but it seems like it was always around whether on the radio or some live TV appearance with the great Brubeck quartet.  He was as ever present on TV in those days as your average superstar rapper or American Idol zombie is today.  When CBS broadcast the Kentucky Derby back then, the theme music for the show was Brubeck's version of "Camptown Races".  I can remember commericals for Washington Senators baseball telecasts that used the Quartet's sprightly "Unsquare Dance" for background music.

The quartet with Paul Desmond, Eugene Wright and Joe Morello, was the most famous group of Brubeck's career but it was really just a part of it. He seems to be often overlooked in the Cliff Notes version of jazz history which lists the most influential post-war pianists as Monk, Powell, Evans and Tyner and you can't think of that many players who have openly followed his craggy, chord-heavy style but he was a major figure, one of the first to combine classical music and jazz with his early octet, pioneering in unusual time signatures like the 5/4 beat of you-know-what (which was actually written by Desmond) and going on to write classical works in his later years. Some people knocked Brubeck for not "swinging" enough and seemed to dismiss him because of his massive commerical success.  Listening to him ("Blue rondo A La Turk" is playing behind me right now) you have to wonder what they were hearing. For all its complexity his playing could be emotional, funny, tender and viscerally thrilling.  That impish, off-center vamp in "Take Five" is famous for a reason. You just can't get that rolling, slightly sinister line out of your head.

I regret I never got to see him live. The last few times he played in DC the tickets were way out of my price range. Listening to recent recordings though he never seems to have lost his edge.  I have a CD of a live concert by son Chris Brubeck's jazz-blues group TriplePlay recorded just last year. Halfway through the show they play  a version of "Blue Rondo". In the middle of it  there is wild cheering from the audience as the pianist bangs out the crashing chords of the theme.  Even if you hadn't read the liner notes you would know that Papa Brubeck was sitting at the bench, though you otherwise never believe that this energetic, charging music was coming from a 90 year old man.

Dave Brubeck's music had a sly, sophistcated coolness which no one did quite the same way.  His collaborators over the years included a select number of great saxophonists lie Desmond, Gerry Mulligan and on one singular occasion, Lee Konitz and Anthony Braxton. Beyond that were collaborations with Louis Armstrong, Carmen McRae, Lambert, Hendricks and Ross and Jimmy Rushing.  He was a giant.

Posted by Jerome Wilson at 3:48 PM