This is the time of year when professional pop culture writers and amateur bloggers alike talk about all the TV shows, music, movies, etc. that they really loved over the past 12 months.  For myself, I barely watch television and I don't listen to enough new music to make a list of that worthwhile. I did have to do a Top 10 list for Cadence but that was a couple of months ago and I've since heard several things I would have considered for it if I hadn't had to turn it in so early.

Movies are the one thing I feel comfortable doing a list for.  I don't go out of my way to watch new films as soon as they come into the theatres but I do see a ton of them on DVD and in repertory theatres. Since I've seen several other people do "New To Them" lists of the best films they saw for the first time within the last year I'm doing one of those. Saying all that, it turned out that most of the films in my personal Top 10 were released within the last couple of years.  In fact a current film I just watched this morning has edged The Pawnbroker off the list. Here then are the ten best films I saw for the first time in 2012.

George Clooney has been a very dependable presence for quality films in the last few years.  He misses sometimes, as with The Ides Of March, but this thriller, a tightly structured story about a professional fixer who gets involved in a sinister corporate coverup, is really good work.  Clooney is tough and steely and Tom Wilkinson and Tilda Swinton have excellent supporting roles as well.

I went off Steven Speilberg after being bored by Indiana Jones and the Temple Of Doom long ago.  His roller coaster camera moves and broad comedy just wore me out.  I've been meaning to catch up with his more serious films like Saving Private Ryan and Munich for a while but I never did. Then I saw this and...wow!  The movie takes a relatively overlooked detail of Abraham Lincoln's life, his fight to pass the constitutional amendment to ban slavery, and makes a compelling drama out of it. It takes the shining halo off Lincoln's head and shows he had to be a crafty and sometimes devious politician to get important things done. Daniel Day-Lewis is excellent and will probably win his third Oscar easily but the show-stealing performance here is by Tommy Lee Jones as the radical abolitionist congressman Thaddeus Stevens. 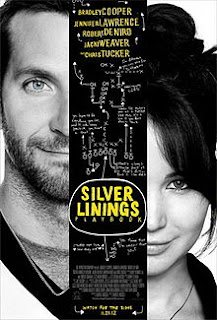 This is the one I saw today, a romantic comedy that redeems the genre's reputation,  a wild, multi-faceted story about two psychologically damaged people finding each other with parents, bookmaking, the Philadelphia Eagles, and a dance competition all figuring in.  Bradley Cooper is wonderful in the male lead, doing a lot of heavy lifting just with his eyes and face and Jennifer Lawrence proves again she is a fine young actress while being indecently hot to boot. Robert DeNiro erases the memories of years of indifferent performance in lousy movies and  even Chris Tucker does a good job.

I'm obviously drawn to movies about outsiders and messed up people because there are a lot of them on this list. This is a wonderful drama about a man made an outsider by nature,  Mark O'Brien, a journalist and poet who contratced polio as a child and spent most of his life living in an iron lung or on a respirator. It's the story of what happened when he decided to lose his virginity so he could have a full relationship with a woman and hired a sex surrogate to teach him what to do.  It's funny and poignant without ever being maudlin or over the top.  John Hawkes is really wonderful as O'Brien as is Helen Hunt as the woman who becomes his therapist and friend. 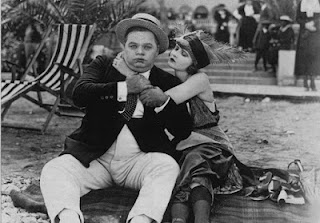 Here's the joker in the deck, the one film on this list that is not recent. I found it in a DVD set called The Forgotten Films Of Roscoe "Fatty" Arbuckle and it's a feature length comedy Arbuckle made in 1921 a few months before the scandal that destroyed his on-screen career. It was only released in Europe and never saw the light of day on American screens.  Arbuckle plays a rich and single playboy who inadvertently gets engaged to three different women while really being in love with a fourth.  It's a wild farce that shows off Arbuckle's great physical skill at falls, dives and tumbles as well as his ability to play a sympathetic romantic comedy lead.  This shows how sad it is that more of Arbuckle's later work hasn't survived.

Paul Thomas Anderson's story of unrequited love between the founder of a cult-like religion played by Philip Seymour Hoffman and the damaged ex-sailor he takes under his wing played by Joaquin Phoenix.  It's sprawling, dreamlike and quite lovely. Amy Adams, as Hoffman's wife, like Cooper and Lawrence, gives one of this year's "Where the hell did that come from?" performances. 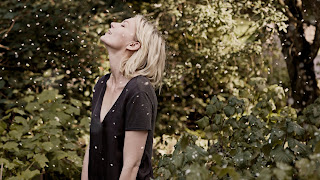 I dearly love Lars Von Trier's Breaking The Waves and Dogville  but I was skeptical if this could be as good as I had heard. It is. It's a meditation on finding your own peace while the world literally collapses around you. Kirsten Dunst proves yet again that there are a hell of a lot of good young actresses around these days.  I've never seen another film turn the end of the world into a thing of serene beauty this way.

The most extraorindary thing about this film is Tilda Swinton's performance as a mother who comes to realize that her young son has the capacity for murder and can do almost nothing about it. This film turned out to have some eerie presentiments about what happened at Sandy Hook Elementary School and the whole thing is a slow-growing horror story. 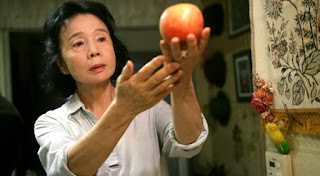 This Korean film resembles Kevin slightly in that it's about a parent who deals with the fact that her child did something horrible, but here it's a grandmother who finds out the grandson who lives with her is one of a bunch of boys who drove a classmate to suicide.  The grandmother is also suffering from the early stages of Alzheimer's and trying to find some measure of peace and happiness in her life through writing poetry.  It's a beautiful and haunting film and the lead actress Jeong-Hie Yun is a strong, heartbreaking presence with the fragile determination of Takashi Shimura in my beloved Ikiru.

I wrote about this one earlier and it continued to stay with me more than anything else I saw all year. The personal search for religious faith is something filmmakers rarely touch and even then, never with the honest uncertainty that Vera Farmiga put in this movie.

Posted by Jerome Wilson at 2:44 PM