This is the time of year when many people take stock of themselves and make resolutions about what they want to do over the coming year.  I don't want to commit to anything really specific in print but I have taken some stock of myself the last few days.  I have to face the fact that I'm not getting any younger. I'll turn 58 in two and a half months and I had a potentially life-saving operation last October.  It's time I started really doing some of the things I want to do in life.  I'm pretty certain what that means and hopefully I'll be taking more decisive steps in that direction.

As for this blog I want to be more consistent in updating it than I have been.  I've really fallen off when ir comes to discussing the many movies I see.  I think I get intimidated because I don't follow the viewing patterns of other movie bloggers I read.  I don't simply concentrate on the new stuff that hits theatres or what Turner Classic Movies is showing.  Most of my watching comes from what I get from Netflix and ClassicFlix which covers a wide range of material. I'll be getting the recent documentary The Woodmans in the mail today and the next few things in my Netflix queue include some Charlie Chaplin shorts, classic TV dramas, an Indian film and two very different types of concert movies. It's finally dawning on me that wide range is what might make my opinions valuable to someone. If nothing else I want to spend 2013 keeping a running diary here of the movies I have watched though I'll also be writing my thoughts on music and other things as they come to mind.

I haven't actually seen a feature film yet this year but I'll start with a couple of things by two of my favorite comics I've seen over the last of couple days: 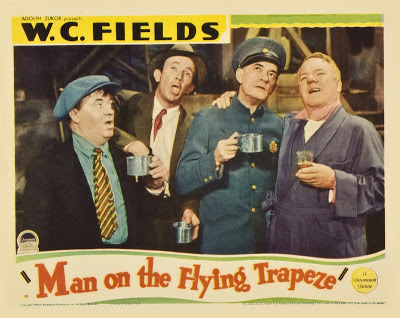 "There are burglars singing in the cellar."

That line alone suggests the best of this W. C. Fields comedy.  It's one of the films he did for Paramount that cast him in a domestic setting as a henpecked husband with a nagging wife, a loving older daughter, relatives  who make his life miserable and a plot where he looks foolish for a while but emerges in triumph by the end. It's the same formula he used earlier in It's A Gift and You're Telling Me and would later lampoon brilliantly in The Bank Dick. This film is not as funny as the rest of those.  His final victory, being promoted at his job, is on a smaller scale and, unlike the others, this film does not make room for any of his classic vaudeville routines.  Still the entire sequence where he comes upon the aforementioned singing burglars, played by Walter Brennan and Tammany Young, and ends up singing and drinking his own homebrew with them is as memorable as anyting else in his movie career.

This is part of a Kino set of a very obscure period of Buster Keaton's career, a series of 16 short comedies he made for Educational Pictures in the mid-30's.  I've actually only watched four of the eight comedies on the disc so far. Most of them aren't that great, cheap and goofy with little plot and the only fun coming from Buster's physical gags.  The exception to this is Grand Slam Opera, a film for which Keaton is credited as co-writer.  Its plot, such as it is, has Buster going from Arizona to New York to appear on a radio talent show to compete as a juggler. (Think about that for a minute.)  This two-reeler is hilarious. Buster has almost no dialogue, except to repeatedly ask an irritated young lady "How about dinner and a show?", and does two amazing dance sequneces, one where he is dancing enthusiastically all over his apartment furniture. There's also a but where he and an orchestra conductor repeatedly whack each other to the rhythm of the "Anvil Chorus", something reminiscent of his mentor, Roscoe "Fatty" Arbuckle.  It certainly isn't Cops or Sherlock Jr. but it's much funnier than you would expect from this low point of Keaton's life.
Posted by Jerome Wilson at 12:02 PM