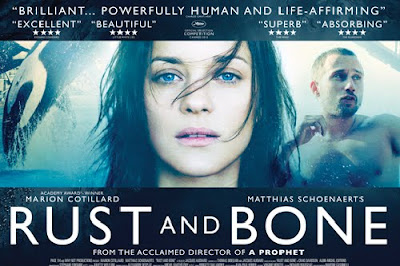 It's yet another romantic film about misfits finding each other but this is a very different beast than the two movies I've talked about in previous posts.  This French drama concerns the relationship between a whale trainer who loses her legs in an accident and a brutish but naively direct man who does underground fighting.  From the trailer you get the idea that this is going to be a story about a simple guy who helps a bitter, disabled woman adjust back into society. It;s that way for about ten minutes  but the movie eventually goes to different places.  The relationship between the two develops from friendship to sex into romance and finally love and this is mostly displayed through subtle gestures from the two great leads, Marion Cotillard and Matthias Schoenaerts. Cotillard is especially wonderful at displaying her changing emotions with her facial and body expressions. You really get a sense of her character's slowly returning confidence and Schoenaerts is great at evoking the mix of violence and innocence in his charatcer.  Director Jacques Audiard does this without ever resorting to the kind of snappish dialogue and big histrionic scenes an American version of this story would probably use. It unfolds with poetic visuals, even in the slow motion scenes of alley fighting and a magical scene where Cotillard returns to the water park where she had her accidents and rebonds with one of the whales she used to train.

The special effects are also standouts, able to create a complete illusion that Cotillard's legs are really amputated at the knees. You see stumps or artificial legs from every angle, even to the point where she is crawling around legless on the floor like Lon Chaney Sr. in one of his "legless cripple" roles. 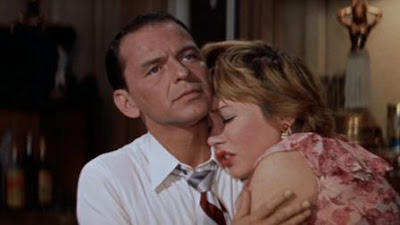 This is one of those films that is widely regarded as a classic but which isn't discussed very much and I can see why. It is a great film but one that is pretty downbeat especially for its time.

It's certainly a different role for Frank Sinatra who plays a disillusioned author and ex-soldier who comes back to his home town and is repulsed by its phony, repressive atmospehte especially as personified by his glad-handing brother played by Arthur Kennedy.  The only bright spots in the place for him are a schoolteacher (Martha Hyer) who he falls in love with and two people from the so-called "wrong side of town", a gambler (Dean Martin) and a bar girl (Shirley MacLaine).

There's no Sinatra swagger in this. He is subdued and does a lot of subtle conveyance of his emotions. Martin's character is complex. The actor's easy-going, hard-living persona acquires a mean edge here. MacLaine whose character carries an unrequited torch for Sinatra, is heartbreaking. Hers is one of the classic "Should Have Won An Oscar" performances.  The real magic is put into this film, though, by director Vincente Minnelli. Usually given to lighter, more optismic fare, he dials down his visual flamboyance until the movie's amazing carnival-set climatic sequence which he fills with quick cuts, garish colors and panoramic camera sweeps.

I've had a long-standing jones for animated cartoons ever since I was a kid. I enjoy modern work but I also love watching classic studio work with an adult eye, even on grab bag DVD collections like this.

As usual for these discs, this was a collection of random public domain cartoons from various sources like the Paul Terry studios, Famous Studios, and Warner Brothers.  Some of the prints were washed out and choppy but there were points of interest.  "The Talking Magpies" was the first Heckle and Jeckle cartoon ever made. It's actually a Farmer Al Falfa item where he is menaced by prototypes of the birds, here husband and wife.(!)  The single Warner Brothers item is Friz Freleng's "Jungle Jitters" one of Warners' infamous "Censored 11", cartoons pulled from official circulation because of their racial stereotyping.  This one has a salesman trying to hawk his wares in Africa and winding up on the dinner menu of a tribe of cannibals. Like most of the others on that list I've seen, it really isn't that great a cartoon and the stereotyping is really no worse than in most films of the period.

The most interesting cartoon here was "Cheese Burglar", a Famous Studios piece starring Herman the Mouse before he was teamed up with Katnip.  It had a pretty nasty plot of Herman scheming to get a buddied-up dog and cat to kill each other so that he can have free hand with the food in their house. The best part of the show is that most of it features the distinctive and exaggerated animation of Jim Tyer. 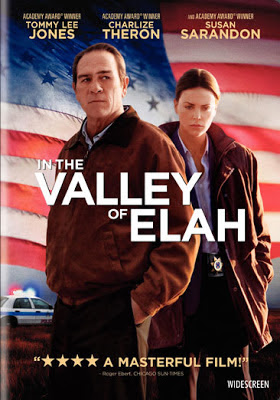 Films that have been made about the Iraq and Afghanistan wars have a reputation for being box office flops because of their very heavy and downbeat nature although Zero Dark Thirty looks to break away from that cliche.  That applies to this film but it's a shame few people know about it because it is pretty good.  Tommy Lee Jones plays a father who learns his son is missing after coming home from Iraq and goes to his Army base to find out what happened. His son turns up dead and the mystery behind it turns out, of course,to be a very bleak story.  Paul Haggis directs this with a somewhat heavy hand but there is a sad reality to the plot and the acting is uniformly fine.  Tommy Lee Jones is as magnificent as ever, going from flinty and determined to devastated and humble with excellent timing, and Charlize Theron is very good as the determined cop who becomes his ally. There is also nice support from the rest of the cast including James Franco, Susan Sarandon and Barry Corbin.
Posted by Jerome Wilson at 4:36 PM