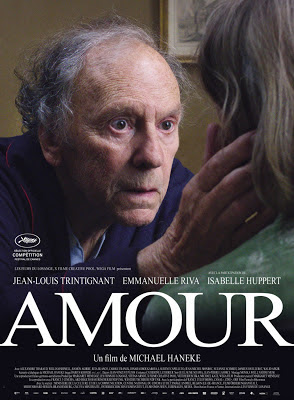 It amazes me that Amour got as many major Oscar nominations as it did. It's not that the honors aren't warranted. The film is incredible and deserves every accolade it gets. It's just that a foreign film about old age and death is not the sort of thing Hollywood usually endorses.

The plot is very simple. Georges and Anna, played by Jean-Louis Trintignant and Emmanuelle Riva, are an elderly couple, retired music teachers, living happily in Paris.  One morning Anna has a stroke, paralyzing her right side. The rest of the film charts her slow decline while Georges does all he can to care for her. This film will probably resonate with every person who has ever been involved in taking care of a aging loved one who is slowly wastin away. Watching Anna go from being confined to a wheelchair but alert to having small seizures contort her face and finally in the state of being bedridden and deliriously talking about her childhood, brought up unpleasant memories for me of watching my mother go through similar things when she was slowly succumbing by cancer.

Director Michael Haneke is notorious for films that spotlight the darkest sides of human nature like Cache, Funny Games, and The Piano Teacher.  This time he still deals with an unplesant subject but the emphasis is on true love and devotion, not casual sadism or suicide. Georges uncomplainingly tends to all of Anna's needs whether feeding her, cleaning up after her or exercising her legs.  Eeverything he does he does out of love.Not to be greedy about this award thing but Trintignant deserved as much Oscar consideration as Riva.  His character's tenderness and underlying sorrow are as crucial to the film as Riva's playing of a woman helplessly losing her strength and vitality.  Isabelle Huppert, one of Haneke's favorite collaborators, plays their daughter with a note of bewildered anger and sorrow that is again resonates for those of us who've been there. Haneke's handling of all this is sympathetic but not maudlin and the last couple of scenes end the movie on a note of dreamlike grace. This is a work of remarkable sensitivity and compassion from a director who's shown little of it in the past.

Netflix's synopses of its DVDs can be inaccurate sometimes but in this case, it was downright misleading.  The summary of this disc made it sound like this was a straightforward film of the 1985 concert version of Stephen Sondheim's musical drama, Follies.  Instead this was a documentary whose first half covered the three days of rehearsal leading up to the show and whose second half consisted of excerpts from the actual concert.  A lot of the big numbers were included in rousing versions such as Elaine Stritch belting out "Broadway Baby", Carol Burnett doing "I'm Still Here" Lee Remick vamping through "The Story Of Lucy And Jesse" and Barbara Cook singing "Losing My Mind" but half of the show was nowhere to be found. Still there was enough here to rekindle my appreciation of Sondheim.  After watching this I added Into The Woods, Passion and Sunday In The Park With George to my DVD queue and the next day bought the CD of the full concert. 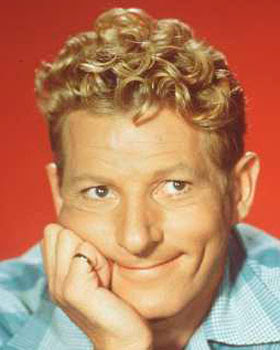 Yesterday Turner Classic Movies spent the entire day showing Danny Kaye movies in honor of his 100th birthday celebration. (During the broadcast his daughter, Dena, confided that he was actually born in 1911, making this his 102th birthday but since he always said he was born in 1913 they're going along with that.) I was going to do other things yesterday but the thought of watching Kaye for the first time in dog's years sucked me in and I checked out three of the movies.

The Kid From Brooklyn (1946) and The Secret Life Of Walter Mitty (1947) both came from the early part of his film career when he was under contract to Samuel Goldwyn.  Both were big, splashy comedies full of physical shtick, pretty chorus girls and garish Technicolor that showed Goldwyn positioning Kaye as the successor to Eddie Cantor who made musical comedies for the studio in the Thirties. Kid From Brooklyn is actually a remake of an earlier Harold Lloyd comedy, The Milky Way, about a milkman who is deluded into think that he's a champion boxer while Walter Mitty starts with the basic James Thurber story about an inveterate daydreamer and tacks on a wild spy plot.  Kaye is very good in these showing off his physical agility and verbal skills, but really any skilled comedian of the period could have done most of this stuff.  The parts where he really shined for me were the language twisting musical numbers written by Kaye's wife, Sylvia Fine, "Pavlova" in Kid and "Symphony For Unstrung Tongue" and "Anatole Of Paris" in Mitty. These are the sort of numbers that no one but Danny Kaye could pull off. 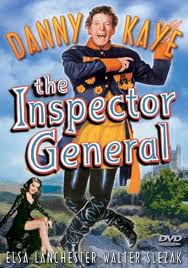 The other Kaye movie I caught was The Inspector General (1949), a post-Goldwyn movie of a more satiric bent. This was based on the Nikolai Gogol story with Kaye playing a vagabond who is mistaken for one of Napoleon's inspector generals by a village's corrupt politicians and plied with bribes and favors. This is a richer movie than the other two with Kaye getting some moments of poignancy as well as craziness, some wonderful physical comic sequences including an extended exercising routine and an overall feel of well-staged comic opera.  There's a fine supporting cast featuring the likes of Walter Slezak, Elsa Lanchester and Gene Lockhart and another excellent Fine-Kaye showcase in the "Gypsy Drinking Song" number.
Posted by Jerome Wilson at 10:26 AM