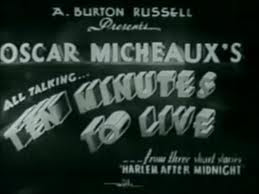 Oscar Micheaux was the first significant African-American film director with a long career that stretched from 1919 into the late Forties.  The first film of his I ever saw was one of his late ones. With its clunky acting and cheap sets, it made me write him off as just another bad filmmaker.  After seeing more of his work, especially his silent films I now know better.

In the silent era, without microphones and other sound equipment to worry about, Micheaux was able to do striking camera compositions that gave a sense of space. The best example I've seen of this is Within Our Gates, a 1919 social problem drama that rally uses outside locations well and, by the way, also contains the most frightening depiction of a lynching I've ever seen.  If his later films look cramped and cheap it's partially because the low budgets he had to work with  didn't allow for the kind of sound equipment that would allow outdoor shooting.

Ten Minutes To Live shows the difference between the two looks. Though it was released as late  as 1932, it's still a part-talkie, part-silent movie.  There are actually two parts, both conventional melodramas and set in the same Harlem nightclub.  The first part is all-talking and concerns a conman who seduces young women with the promise of a movie role but is shot by one of his victims.  The second part is the more interesting. It's about a young woman at the club who gets a note telling her she has ten minues left to live. After this, the movie goes into a silent flashback section showing how she got to this point and that's where you see some of Micheaux's eye. Scenes go through a train, Grand Central Station, New York streets, a residential neighborhood and a rooming house, and even though the film itself looks worn and dark, you get a feeling of tension and drama that is not in the talkie parts. Since this is an early talkie there are also a few early 30's specialties to stretch things out, like singers, comedians, scantily-clad dancers and a couple of actresses lounging around in their lingerie.  It's standard Poverty Row work but there is some glimmer of real artistry here. 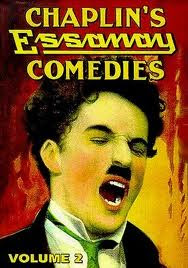 Essanay Studios was the second stop in Charlie Chaplin's rise to movie fame, after beginning with Mack Sennett at Keystone and before moving on to Mutual to do his most-seen shorts.  The six shorts on this disc show that Essanay was a period of transition for him.  Three of them,  By The Sea, Work and A Woman are standard slapstick farces of the time but two others, The Tramp and The Bank, show the beginnings of his more serious side as in both films, his downtrodden character foils robbers and thinks he gets the girl only to find out at the end she's in love with someone else, leaving Charlie to shuffle alone into the distance.  A Woman is also notable as the only time I've seen so far where Chaplin indulges in the time-honored low comic tradition of dressing up as a woman.

The sixth short on the disc, His Regeneration, is a "for completists only" inclusion because it isn't really a Chaplin film. It actually stars Essanay's owner, G.W. "Bronco Billy" Anderson, as a thief who turns over a new leaf. Chaplin only appears as a cameo in a dance hall scene, cutting up in his Little Tramp outfit. 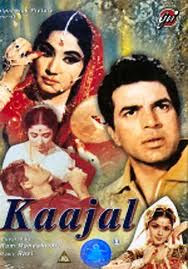 I've only seen a couple of Bollywood films but those have lived up to the standard image of the genre, three hour melodramas with singing, dancing, comedy and lavish sets and costumes.  This one fits the picture as well.  It's about an Indian prince, his family and the people he's grown up with as his virtual siblings.  The plot has enough layers and twists in three hours to last an entire season of Downton Abbey. I won't attempt to describe it all but it includes jealousies, two attempted suicides, one drowning, alcoholism, role reversals, a love affair between two servants and of course delirious song and dance numbers.  Meena Kumari, a big star in Indian film, plays the put upon heroine with the virtuous suffering of a Loretta Young or Greer Garson and the film is entertaining for what it is. Personally though I can take one of these heavy breathing Indian concoctions every few months. 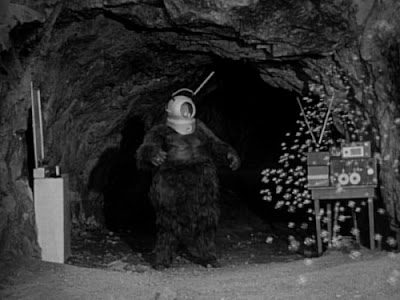 For a while I watched this thinking it didn't really deserve its reputation as one of the worst movies of all time. Yes, there's no getting around the fact that its space alien, Ro-Man, is a man in a gorilla suit with a diving helmet over his head or that his great population-destroying device is a giant bubble machine. On the other hand there are competent actors in the cast and the opening scene clearly establishes the whole thing as a little boy's dream.  Then the movie went on and Ro-Man started to spout off about wanting to be human and the Earth got invaded by fighting lizards (courtesy of the movie King Dinosaur)  and stop-motion dinosaurs (courtesy of The Lost World) and I thought "God, this is bad." At least it's entertainingly silly and, best of all, short.
Posted by Jerome Wilson at 6:39 AM

What a data of un-ambiguity and preserveness of precious experience about unexpected feelings.