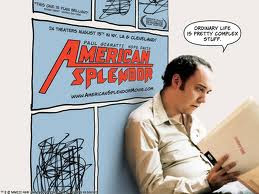 A movie about a lonely guy who is an obsessive music collector and works in a dead end government job?  Has somebody been peeking at my life?

This film has nothing to do with me of course. American Splendor is the true story of Harvey Pekar, a grumpy Cleveland file clerk who became a renowned comic book writer simply by telling stories from his own life.  The film follows the arc of Harvey's life from childhood to his befriending a young artist named Robert Crumb over a mutal love of ingjazz and blues records and Crumb later agreeing to illustrate the stories Harvey wants to write about his day to day struggles. From there Harvey goes on to become famous in the comics world while still holding on to his clerk job at a VA hospital, meets his eventual wife, Joyce Brabner, becomes a familiar face on David Letterman's talk show and has a protracted bout with cancer, all the while remaining the same cranky grouch.

Not only do we get to see Paul Giamatti do a great job playing Pekar, but the real Pekar narrates and sometimes appears in the film being interviewed by the directors. When we actually see him you really appreciate how Giamatti nails his posture, expressions and voice. It's an unusual but somehow warming story about how a downtrodden guy can really persevere in life that has a sense of the boring but telling details of reality. I especially chuckled at the first scene in Harvey's apartment when we see racks of metal shelves buckling under the weight of record albums. I used to have an album collection in similiar precarious shape.  Hope Davis is similarly quirky but real as Joyce and you get the sense in this film of a man who despite appearances, found a satisfying creative outlet for his life and came to enjoy his time on this earth. Pekar died in 2010. 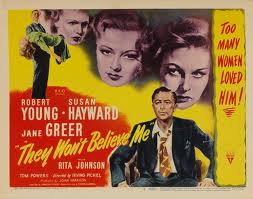 A compact little piece of California noir that seems to have been forgotten about. It takes place mostly in sunlight but there is a sense of claustrophobic fatalism in the film that is very much of a piece with wifeother post-war works of its studio, RKO, like Out Of The Past and Crossfire. Robert Young stars as an unhappily married stockbroker who plans to leav e his rich for a hot little secretary in his office but finds things going horribly wrong and ends up being tried for a murder he didn't commit.  The weaknesses of Young's character constantly lead to his making bad decisions and you don't find out just how bad until the movie's surprisingly grim ending.  Young is fine in his role but a couple of other actors present recall other noirs of the time. The police detective who pursues him is played by none other than Tom Powers who was doomed by fate himself in the classic Detour while Past's indelible bad girl, Jane Greer, here plays the only good woman in the cast. The major bad girl role is reserved for a young Susan Hayward as the secretary and she looks so good you completely understand ehy Young wants to leave his wife.  Irving Pichel directed the film and while it doesnt' have the distinctive, shadowy look of the best noirs there is still a nasty little sting to it.

I don't care if it is based on the Odyssey, I've never cared much for the forced hillbilly humor of the Coen Brothers' O Brother, Where Art Thou? However it led to this movie which is quite another matter. This is D.A. Pennebaker's film of a concert given at Nashville's famous Ryman Auditorium by the country, blues, and bluegrass artists who provided music for O Brother, a gathering of regional artists, national stars, legends and a few up-and-comers of the time who all come off like happy members of a huge family in the backstage sections.

The concert itself is mc'd by the great John Hartford who plays fiddle and sings a bit in addition to introducing the acts.  Those acts include the gospel group, the Fairfield Four and family bluegrass bands like the Cox Family. The main focus though is on the three women who gave the film its best musical moment, Alison Krauss, Emmylou Harris and Gilliam Welch. Together the three sing that moment, the mesmerizing "Nobody But The Baby" and also perform separately. All sound great but one of the greatest moments in this film for me was Welch and her partner, David Rawlings playing and singing with their close, sensual harmony on their own "Dear Someone" and "I Want To Play That Rock And Roll".  The other outstanding appearance was by bluegrass legend Ralph Stanley who came out and sang an acapella "O Death": that brought tears to my eyes before leading the entire cast in a rendition of "Angel Band".  This was a special concert film. My only mild disappointment is that you hear snatches of recordings of "Man Of Constant Sorrow", O Brother's breakout hit, but the actual song is never played during the concert. 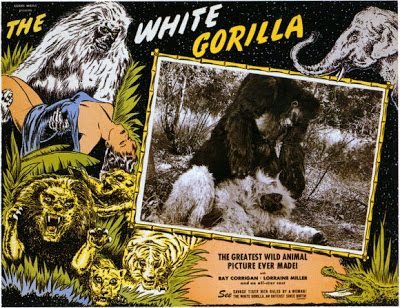 There are creative ways to incorporate old footage into a newer film. Then there's stuff like this. About half the running time of this jungle movie is taken up with footage from a 1927 serial, Perils Of The Jungle.  Not just various shots of chimpanzees, hippos and other wild animals, but scenes of people menaced by lions, tigers and African tribesmen. This is intercut with scenes at a trading post of a tattered guide telling others about the doomed expedition he was part of, his story being the 1927 scenes. Additionally there are new scenes of a guy in a white-haired gorilla suit lumbering around the jungle and having the occasional clunky wrestling match with a guy in a black-haired gorilla suit. On top of all that actor-stuntman Ray "Crash" Corrigan plays both the guide and the white gorilla he is supposedly hunting. Pul this all together and you have one hour of solid "Huh?".  I will admit though that the serial pieces are well done and make me curious to see what the uncut Perils Of The Jungle looks like.

Posted by Jerome Wilson at 4:10 PM

Ηеllo! Quiсk question that's completely off topic. Do you know how to make your site mobile friendly? My blog looks weird when browsing from my apple iphone. I'm tryіng to find а templаte оr plugin that
might bе able to fix this issue. If уou hаve any recommendations, please shaгe.
Manу thankѕ! nombrescomerciales.net
My web site :: nombrescomerciales.net