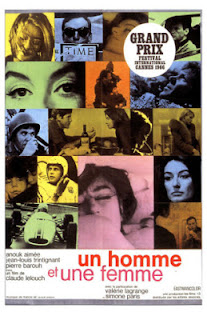 This came as something of a surprise. I knew A Man And A Woman had been a big hit film in the Sixties with a famous musical theme. What surprised me on finally seeing it was its look. With jump cuts, flashbacks, improvisation, non-direct sound and constant switching between black and white, tinted and full color film, this uses all the techniques of the French New Wave to tell a conventional love story of two widowers, a script girl and a racing driver, getting together.  The means are used to very different ends than anything Truffaut or Godard ever did but director Claude Lelouch tells a really beautiful story. All the setups and camerawork looks familiar today because these have been borrowed by a thousand music videos and commercials over the years. That doesn't take away from the understated charm of the original. I especially like the fact that so much of the film is told visually without resorting to large chunks of dialogue. Today you could never get the same story told without five minute soliloquies from the principal actors.

There was a drawback to my viewing of this film however. I saw it at the AFI Silver Theatre in a film print that was in heinous shape with scratches, speckles and echoey sound throughout. The problem, as I understand it, is that studios are reluctant to make prints on film anymore as they try to get theaters to switch to all digital projection. So you're left with old, worn out copies like this with that have warmth and texture in their images but look like hell. I'd never really thought about the film vs. digital debate before but this demonstrates that we're losing something in the changeover. 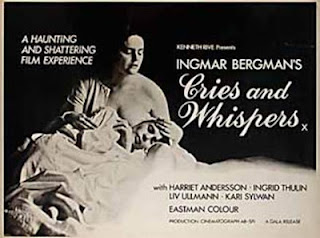 I remember all the discussion about this Ingmar Bergman film when it was first released but I never had a chance to see it until now.  It turned out to be a shorter work than I expected, a simple, straightforward piece more like a short story than a novel. It concerns three sisters in 19th century Sweden. The eldest is dying of cancer while the other two and their maid attend to her. While in this situation the two younger sisters flashback to incidents that show the sexual frustration in their lives and also try to overcome their emotional distance from each other.  The film has an austere color scheme of red, white and black and features three of Bergman's finest actresses, Harriet Andersson as the dying sister, Ingrid Thulin as the rigid, repressed one and Liv Ullmann as the one given to flirting and adultery.  It flows along so naturally and quickly it goes by almost before you know it. It may not be up to the greatness of The Seventh Seal or Wild Strawberries but it's definitely the work of an artist. 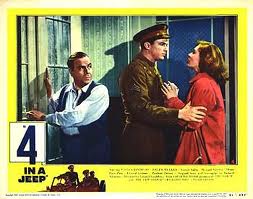 This is an unusual piece of post-World War II cinema. It's actually a Swiss-made film concerning four soldiers working police duty together in post-war Vienna. Since Vienna was still split into four Allied occupation zones then, the patrol consists of one American, one Russian, one British and one French soldier. Conflicts arises when the four come across a Russian woman waiting to hear from her husband who's due to return from a POW camp. The Russian authorities are taking special interest in this woman which arouses the protective instincts of the American solider and things get more complicated from there.

The first thing unusual here is that the Russian soldier is made out to be a human being, something you probably would not have seen in an American film with this plot in 1951. He is by the book and a bit hard-headed but he is still shown to be a nice guy down deep. There's even a flashback sequence where he and the American solider, played by Ralph Meeker, are laughing and roughhousing together when they meet in the final days of the war, a sequence that would have gotten this movie's producers hauled before Congress if this had come out of Hollywood.

Overall the movie seems to try for the dark atmosphere of another post-wat thriller set in Vienna, The Third Man. There's even a climatic chase through a construction yard that echoes the earlier film's famous chase through the Vienna sewers. Nothing in this movie matches that one but the shadowy compositions do give some distinctinon even through the version on this DVD looks a bit dark.

The DVD also came with a surprising extra, a short  called Your Job In Germany made for the American troops who would be occupying the country after the war. It warns against fraternization with locals but it does so by suggesting in pretty extreme terms that the German people have been warmongering villains since the days of Bismarck and are just laying low and waiting for the chance to start another war. This may have been sound thinking in 1945 but considering the way events played out this comes off really bizarre now. (By contrast Russia is mentioned  only as one of Germany's many victims.)  Even stranger is the fact that this was made by two men you wouldn't associate with a film this belligerent even though they were both key parts of the Army's motion picture unit at the time. The director was Frank Capra and the writer was one Theodore Geisel, later better known to the world as Dr. Seuss. The sentiments here are way removed from his later writings about Grinches and Sneetches. 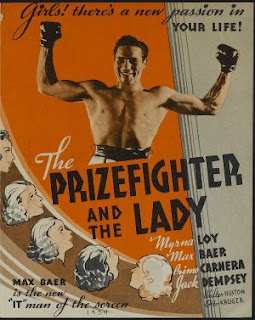 Today a big boxing or MMA match will most likely be promoted by a series of documentaries on cable about the fighters' backgrounds and training.  In 1933 they did this by making a full-blown dramatic movie.

Actually I don't know for sure if The Prizefighter And The Lady which starred real-life fighters Max Baer and Primo Carnera was intended as a promotional gimmick but the two did fight for Carnera's heavyweight title a year after the film's release with Baer winning.  The film itself is a fine little romantic drama with maybe more authenticity about the boxing world than usual because of its casting.

Baer stars as a bouncer who becomes a boxer at the urging of an old-time fight manager played by Walter Houston. He meets a nightclub singer played by Myrna Loy and immediately falls for her despite the fact that she's the mistress of a big-time gangster.  The two fall in love and get married with the gangster's grudging approval, but Baer immediately starts messing things up by playing around with every other woman he meets even as he keeps winning fights and rising through the ranks. Things turn as they usually do in boxing movies with the fighter becoming so full of himself he turns his back on both his wife and manager and continuing his high living leading up to the climatic fight with the champion played by Carnera.

Baer is a decent actor and makes an able foil for Loy who looks so good here you wonder why he would have any inclination to mess around with other women. The movie comes from that early 30's era when gangsters were often portrayed as being tough but gallant so Loy's mobster lover, played by Otto Krueger,  does a lot of snarling and threatening but in the end he steps aside to let Baer and Loy live happily ever after. Another feature of the day, musical numbers, shows up along the way as Baer does an extended musical training sequence with a bunch of chorus girls under the excuse of his being in a stage show to promote his fights.  There are cameos from a lot of other legendary old-time fighters like Jack Dempsey, Jess Willard and James Jeffries and even a wrestler, Strangler Lewis and the big fight is given plenty of time to unfold before ending in a draw. Incidentally Baer is supposed to have said that studying Carnera's fighting style in this film helped him win when they fought for real. I bet HBO would never have let that happen.

Posted by Jerome Wilson at 6:53 AM

Labels: A Man And A Woman, boxing films, Cries And Whispers, film, Four In A Jeep, Ingmar Bergman, The Prizefighter And The Lady