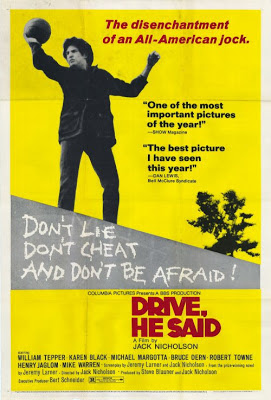 This is a lesser known film from the production company BBS which tried to revolutionize American cinema in the early 70's and produced the likes of Easy Rider, Five Easy Pieces and The Last Picture Show. It's the directorial debut of Jack Nicholson and comes off like the poor relation of those classics, particularly Pieces.

It's a typical youth story of the period. The main character is Hector, a college basketball phenom who is ambivalent about much of life, especially the focus on the game his coach demands and his clandestine relationship with the girlfriend of one of his professors. Meanwhile his friend, Gabriel, is a vague counterculture type, terrified of going into the army, who is gobbling uppers and staying awake  so he'll be too wired to pass his draft physical.

The film was a critical and commercial flop in its day and it hasn't improved with age. Hector and Gabriel don't project any kind of personality and it's hard to feel empathy with either of them. William Tepper, playing Hector, really loses out because it's hard not to compare his character to Bobby Dupea, the insecure drifter played by Nicholson himself in Pieces, and that's a comparison the poor guy cannot win. He even has Pieces' Karen Black playing his girlfriend. As Gabriel, Michael Margotta is just annoying and creepy. It's especially hard to like him after one extended scene where he breaks into Black's home and terrorizes her. You think he's going to either rape or kill her but thankfully neither happens. It's then really hard to care later when he's led away, naked and insane, to an institution. The best acting in the film comes from the two people who would go on to have substiantual careers, Black, whose character here is a lot more intelligent and independent than her sad little country girl in Pieces, and Bruce Dern who plays the hard-assed basketball coach with more depth than you might think. With a younger Nicholson and Dennis Hopper in the leads, this might have been something. What's here is just "meh". 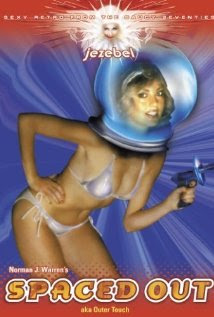 Sometimes when an odd film comes to the top of my Netflix queue, I try to remember why in the world I ever put it in there.  This one showed up after I watched an interesting low-budget horror film, Prey, that was a take on the D.H. Lawrence story "The Fox" with the man invading the woodland home of a lesbian couple turing out to be a vampiric alien. The director of that movie was Norman J. Warren and in the accompanying interview on his career he mentioned a sex comedy he'd done called Spaced Out.  I found it and it turns out it wasn't one of his finest hours.

The film is a silly low-budget British sex farce, the kind of thing that filled late night cable schedules back in the Nineties.  The plot has three aliens, all busty, scantily-clad females of course, landing their spaceship on Earth and collecting some samples of the local animal life, namely a cocky macho guy, a frustrated businessman and his frosty fiancee and a spindly young nerd with a handful of porno magazines. The aliens have no idea what men are and know nothing about the usual beast-with-two-backs stuff. If you've ever seen any direct-to-video movies starring the likes of Jacqueline Lovell, Kira Reed or Shauna O'Brien, you can imagine what happens next...

...but in case you can't, the macho guy seduces one of the aliens who becomes so insatiable it freaks him out, the businessman beds his fiancee and the little guy makes it with all three aliens. At the end the first three people leave the ship but the nerd decides he's got nothing to stay here for (and you can't blame him) and goes with the aliens back to their home planet. Unfortunately the spaceship, which has been falling apart all through the picture, blows up killing everyone on board which I thought was an unneccesarily nasty way to end things. I hope that at least Warren's other horror films are an improvement on this. 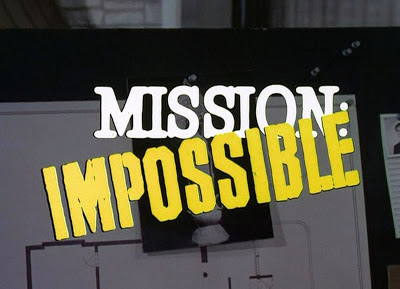 Just to be clear I am talking about the TV show Mission: Impossible, not those "Tom Cruise, Macho Man" movies that have been showing up the last few years.  It's always interesting to me to look back at the early episodes of a long-running television show and see how it played before it found its winning formula. The four shows on this disc from Mission's first season show more differences from the familiar format than I expected.

It's not just having Steven Hill star as the head of the IMF team before Peter Graves took over in the second season. It's that three of these four episodes do not follow the usual pattern of the entire team concocting some elaborate scheme to foil a villain. Two of the shows, "Elena" and "The Reluctant Dragon" featured Martin Landau without most of the others, solo on the first show and with only Greg Morris on the second. Another program, "The Short Tail Spy", featured just Hill, Morris and Barbara Bain. Only "The Legacy", an episode about a hunt for a hidden Nazi fortune, had the entire cast of Hill, Bain, Landau, Morris and Peter Lupus.  Landau's solo stories feel the least like the Mission: Impossible we've all come to know. There's no elaborate trickery in either one, epscially "Elena". They are just straightforward spy tales about an agent who's possibly gone insane and Landau convincing an Iron Curtain scientist to defect, things that I Spy, The Man From U.N.C.L.E. in its serious days, or any other espionage show could have done. I don't know if they tried this format to save the expense of having all the regulars in every episode or if they were just feeling out what worked but "The Legacy" is the only one of these that feels like the show everyone remembers.
Posted by Jerome Wilson at 4:58 PM

Good answer back in return of this query with real arguments and explaining everything on the topic
of that.