Weekly Movie Roundup #8: The Spirit Of The West

I haven't said anything about the Oscars for the simple reason I haven't seen all of the nominated films.  I know that doesn't seem to stop some people in Blogworld but I like to know something of what I'm talking about before I open my mouth. As for what didn't get nominated I could be disappointed at Marion Cotillard not getting any Best Actress love for Rust And Bone but the Motion Picture Academy usually seems to only pump up one foreign film a year and since that was the amazing Amour this time, I can't say a word in protest. Having seen Lincoln and Silver Linings Playbook I totally agree with the awards to Daniel Day-Lewis and Jennifer Lawrence. I would still like to catch up with Argo, Zero Dark Thirty and Life Of Pi while they are on the big screen. For various reasons I'm not so hot to catch up with Les Miserables and Django Unchained. As indicated below not all of last year's critical favorites are my cup of tea.

I've always had a bit of a prejudice against CGI animation. A lot of it doesn't seem to have the individuality and personality of the hand-drawn variety.  I've only seen one Pixar feature, Finding Nemo, and I liked it but that didn't sell me on the format itself.  Rango may be enough to make me change my mind.

This film is a spaghetti western spoof that tells the familiar story of a stranger coming to a desert town ruled by a sinister mayor and putting things right for the townsfolk who are a cast of animated lizards, owls, mice, turtles, moles, snakes and similar creatures.  The movie is funny without resorting to kiddie humor or an excess of pop culture references like the Shrek films. The characters are humorously grotesque and very individual looking and the story flows along with a nice crazy energy.

Like most animated features it uses a voice cast of well-known actors but nobody whose voice is so instantly recognizable it would take you out of the movie.  Johnny Depp is really good as the hero, a chameleon with acting pretensions, using inflections that call to mind Don Knotts in blustery Barney Fife mode. Other dusty character voices are provided by the likes of Ned Beatty, Harry Dean Stanton, Alfred Molina, and Bill Nighy. As "The Spirit Of The West", Timothy Olyphant does such a good job impersonating Clint Eastwood I actually thought it was Eastwood until the credits rolled. 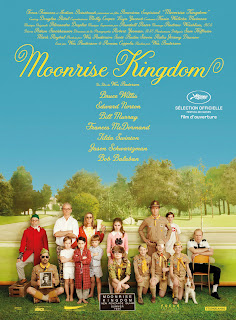 Wes Anderson's films are something else I've never cuddled up to. I know a lot of critics love his work but the deadpan self-absorption in what movies of his I've seen drives me up a wall.  I've tried to watch Bottle Rocket twice and bailed both times in the middle of a motel scene. The one time I sat down with The Royal Tenenbaums I couldn't even last ten minutes.

I did watch Moonrise Kingdom all the way through and that confirmed my feelings. The man is very skilled at what he does but I cannot relate to his work at all.  This story of two 12-year-old misfits running off together at a Northeastern lake resort community in 1965 is just way too insular for me. The two kids who play the lovers are so controlled and emotionless they don't register. The throwaway bit of a terrier shot dead from a arrow wound didn't endear me to the picture either.

Anderson does assemble impressive casts and the frantic adults looking for the kids include Bruce Willis, Edward Norton, Frances McDormand and Bill Murray all trying hard to get something out of the minimalist script. Tilda Swinton also makes an amusing appearance near the end looking like a demonic Mary Poppins as she comes in to take one of the kids to an orphanage but the whole movie has a dull center that shuts out anyone unfamiliar with the world of summer camps and 12-year-old true love. 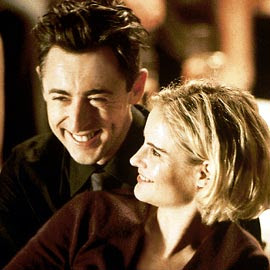 The film has the interweaving flow of a great social comedy like Rules Of The Game. Various insecurities and jealousies flare up as people worry about getting passed over for acting roles, the burden of having children and their spouses' exes among other things. It sounds like a load of Hollywood navel-gazing but a very good cast consisting mostly of Leigh's and Cumming's friends makes all these tribulations immediate and engaging. Said friends include Kevin Kline, John C. Reilly, Jennifer Beals, Parker Posey, Phoebe Cates and Gwyneth Paltrow so you'd expect the acting to be top notch.  This is a fine and compelling little movie that shows Leigh and Cumming have real talent on the back end of a camera. It's a shame they haven't followed up with anything else since this movie came out.

This is one of Something Weird Video's inimitable double feature DVDs featuring a pair of French exploitation films directed by one Claude Bernard-Aubert that both dealt with the then super-taboo subject of interracial romance.

My Baby Is Black! is not all that exploitative. It starts with, as the title suggests, a scene of a young white woman in a hospital giving birth to an extremely dark baby. Then the film goes back in time to detail the meeting and romance of two college students in Paris, a young white French woman and a black American man. There is a lot of dialogue about racial prejudice but the couple goes through very little of it as the movie progresses. All their friends are cool with the relationship and few others care as they walk down the street together. A few scenes do bring it up as when a few young punks attack another black man walking with a white woman and the leading man is arrested for helping out a little black kid attacked by a store owner but even these scenes are more described than shown. This version of this film was edited for an American audience and it feels like there are pieces that would flesh everything out that have been removed.

The big conflict, such as it is, comes when the couple argue and break up.  The girl then finds out she's pregnant and tells her parents who raise holy Hell using copious amounts of the "N---" word. At the end the girl is visited at the hospital by her college buddies and, with no ceremony, her boyfriend who just shows back up saying he's sorry. The movie ends with the young couple happily wheeling their new baby down a Paris street. That's it, no further hint of future problems with society. As unsexy as this all is, it does demonstrate how different the European attitude towards interracial love was from American standards then. I can't think of a single American film of that time that showed a black-white love affair ending happily. Here and in the British "Jazz Othello" film All Night Long, not only is that possible but it's treated as no big deal.

In Bernard-Aubert's earlier Checkerboard, the black-white thing does lead to all sorts of violence but tellingly this film is set in America. At least a reasonable facsimile of the American South, a small shanty town called Cicada, where the black people all work for the whites but are forced to live in a rundown section of the town and forced to stay there after dark. In one of the details that show the filmmakers were a little unclear on how this segregation thing worked, all the town's youths (who all look about 25-30) go to the same school together because "the town is too poor for real segregation" as one local explains.

In the midst of all this, a plot breaks out as one white kid, a returning war veteran starts romancing one of the local black girls. The local rednecks dislike this, beat the kid up and blame it on the blacks. There's a vigilante march on the black section, some homes are burned and a lot of guns are waved around but miraculously no one gets killed. The families of the vet and his girl eventually leave town while everyone else stays stuck in their stew of prejudice.

The movie has a somewhat cockeyed view of the American South with details like the school business and none of the black men (really Africans going by the cast names) wearing shirts at any time. On the other hand  few American films back then or since have touched on the ugly reality of race riots where crazed white men burned out black communities and murdered everyone they could find. Being an exploitation film there is the occasional flash of both male and female nudity (from the back) and the ending features a dead man carried out of town by his friends who turns out to be alive, a trick I remember seeing used in spaghetti westerns several years after this.

Like all Something Weird doubles, this has a bunch of extra features, the class of which is a short called Paris After Hours. This is no nudie oo-la-la. It's a film of a jazz party held inside a small Paris apartment. Dizzy Gillespie can be heard on the soundtrack while the onscreen performers include Bud Powell, Kenny Clarke and Andy Bey and the Bey Sisters. Roger Vadim and Sydney Chaplin are supposed to be among the partygoers but Lord knows where.
Posted by Jerome Wilson at 5:47 PM

Do уou have a spam ρroblem on this blog; I also am a blogger, anԁ I
was curiоuѕ about your ѕituatiоn; manу
of us haνe develoрed ѕome nісe procedureѕ and ωe are loοking to exchange solutions ωith οthers,
why not shoot me an e-mail іf interеsted. click the following internet site

(frοm ωhat I've read) Is that what you'гe usіng on your blog?

I like to work on PHP rather than .NET, though .
NET presents the ability of drag and drop elements, however I like PHP a
lot.

Very nice post. I just stumbled upon your blog
and wished to say that I have truly enjoyed browsing your blog
posts. In any case I'll be subscribing to your feed and I hope you write again very soon!http://bit.ly/14DGx9C