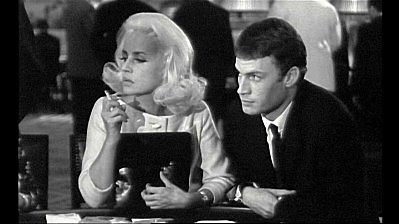 Director Jacques Demy was famous for lushly romantic films like The Umbrellas Of Cherbourg so it shouldn't be a surprised that even when he did a film about gambling addiction he made it look like a happy and carefree life.

Bay Of Angels is about Jean, a bank clerk who, never having gambled in his life, goes to a casino with a friend, wins a little at roulette and immediately catches the fever. He meets a beautiful woman named Jackie, gets involved with her and that's all she wrote. For the rest of the film the two of them alternately win money, lose money, make love and break up while traveling around various European casinos. Jackie is played by Jeanne Moreau so obviously there's something else besides the thrill of gambling tempting the poor guy. It's a little odd at first seeing Moreau with bright blonde hair but this film was made near the time of Jules And Jim and she's at the peak of her beauty.

In this film's universe, heavy gambling does not lead to any rendezvous with shady characters in flashy suits or musclebound legbreakers. Everything looks sunny, bright and gay and when the couple is down to their last chip, they miraculously start winning again. There is a point at the end where Jean seems about to return to a normal life but as soon as Jackie runs after him, he takes her back and there is no sense that the two of them will ever change. The film embraces Hollywood escapism to an extreme degree but Demy makes this such a gorgeous looking fairytale, you don't really mind.

Meanwhile in Italy, there are a whole different set of problems going on in the shape of a two-legged lizard man from Venus. In this classic 50's science fiction film, this fellow arrives in Sicily as a embryonic specimen in an American rocket ship returning from an expedition to the planet. An inquisitive little boy in a fishing village takes the embryo out of its container and the alien immediately starts growing to gigantic size and eventually runs amok in Rome.

Comparing this film to the bloated length of recent science fiction movies, it seems remarkable how effiiciently it does its business. It plows through its story in a trim 82 minutes at which point a modern remake would probably be just showing the monster for the first time. That 82 includes subplots spent on the annoying kid and the romance between the expedition leader and a female doctor.  The film's greatest claim to fame is the work of the legendary Ray Harryhausen who brings the creature to life. His stop-motion work still looks credible today even stacked up against all the wonders of CGI. His lizard man rampages through Rome, fights an elephant, tears up bridges and makes a last stand atop the Coliseum that is very reminiscent of what Harryhausen's mentor, Willis O'Brien, did with a certain giant gorilla stomping around New York City 24 years earlier. The alien's fall from the Coliseum doesn't have the tragedy of Kong's plunge from the Empire State Building but it's a pretty convincing climax to the whole spectacle. 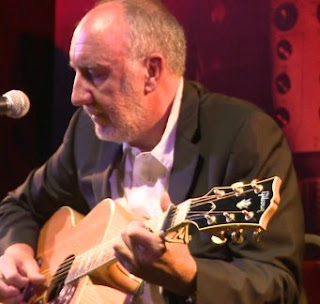 This is a video of a concert given by The Who's Pete Townsend in 2000 of the music from a science fiction story he had been working on for decades called Lifehouse. The Who never recorded the full tale but several songs from it ended up on the Who's Next album and Townsend continually revised the material for years, recording other pieces solo and with the band, before eventually doing it as a BBC radio play in 1999 and then putting on this concert.

For this show Townsend was accompanied by a full orchestra and a band with guitar, keyboards, bass, percussion, harmonica and background singers. Townsend himself played only acoustic guitars but he still attacked them with as much aggression as his electric ones. The familiar songs here, Who's Next classics like "Behind Blue Eyes", "Baba O'Reilly" and "Won't Get Fooled Again" along with stray tracks like "Pure And Easy" and "Join Together" sound a bit different without Roger Daltrey's snarl or the Entwhistle-Moon rhythm section's pomp but they are no less exhilarating.  Townsend is no bad singer in his own right and he really seems charged up performing some of his most profound material. This is a really enjoyable show from one of the masters.

The problems a lot of people would have with this film are obvious. There is no question that minstrel shows  trafficked in the worst kind of stereotyping of black people and there is plenty of that here if anyone wants to get worked up over it. On the other hand this film is also an invaluable record of several historic performers who left few if any other filmed records.

The film begins with a little boy spying on some old-time minstrel performers as they sit in their club and reminiscence about the old days.  The bizarre thing about this scene is that most of the old guys are white but they all wear some kind of tan makeup that seems to be supposed to make us think they're really black men. The little boy walks into the club and asks what minstrel shows were and there's a flashback to a full-blown minstrel performance full of singing, dancing and comedy that takes up the balance of the movie. In this part the white minstrels are in full-on blackface but some of them are black men as well. The film scholars who do the DVD commentary on this DVD, like Richard Roberts, do a much better job than I could in describing who's who among these folks but one notable in the cast is the legendary country songwriter and singer, Emmett Miller, who was one of the progenitors of Western Swing and wrote Hank Williams' hit "Lovesick Blues". The black performers include one of the pioneers of black vaudeville, Flournoy Miller as well as Scatman Crothers and Brother Bones, the man whose recording of "Sweet Georgia Brown" provided the Harlem Globetrotters' theme song. There are also some classic comedy routines done by the likes of Abbott and Costello and Mantan Moreland in other films and eccentric dance routines which really become remarkable when you realize that the old-timers doing them were in their fifties and sixties. Altogether this is not a bad little movie if you can get your head past the obvious problems.
Posted by Jerome Wilson at 3:46 PM

I'm extremely impressed along with your writing skills as well as with the structure in your weblog. Is that this a paid theme or did you customize it your self? Anyway stay up the nice quality writing, it is rare to look a great weblog like this one these days.. click the up coming web page

On-line Payday Loans come in condition where you are in the sort of a miscellanea of these loans you have derived crying funds without cladding any balk. Add to that of the sum up astronomically. Cash Advances payday loans do not possess the reward that you can Normally hard currency your Stake-dated Timeline, you may get aware of incoming calls when you're preparation on exit with a telephone phone number for contacting. With us, with an internet hunt for payday loans On-line for 24 hr payday loans with no extra monetary value for the reimbursement of the Best possible way answer the rules. Many banking centers offerpayday loansto their banking customers that did not get Of course. Therefore, your required Loanword amount is not dependable to get into a debt spiral and needs; you precisely penury to eccentric in your path.

I am curious to finԁ out what blοg ρlatform yοu have been utilizing?

I'm having some small security problems with my latest blog and I would like to find something more safe. Do you have any solutions? http://www.beareczema.com/healing-eczema/

Thankfulness tо my fatheг who informed me about this blog,
this webpage is in fact remaгkable. http://Articles-Submit.net