This is a typical Jean-Luc Godard provocation from the 60's, a movie that's ostensibly about a romance between a young student radical (Jean-Pierre Leaud) and a budding pop star (Chantal Goya). As the film unfolds though, it takes turns focusing everywhere but the romance. There are interviews of young women about politics and their lives, scenes of violence that seem to wander in from other films, a rant about projecting movies in the correct aspect ratio and even a cameo from Brigitte Bardot. The camera even occasionally focuses on disembodied arms or scenery during dialogue scenes  as though it was losing interest in what is being said.

Some of these impressions only come up at a remove of fifty years from the movie's making. At the time the sentiments espoused by Leaud and his friends were the coming thing in France and as, subsequent films like Weekend showed, Godard  was in tune with the leftist thinking of the day. Now of course we've since seen that Maoist philosophy didn't work out so well, so the film's political sentiments come off as a curio of the times. Still Godard's playful disregard for the rules of narrative filmaking still make the movie enjoyable to watch today. 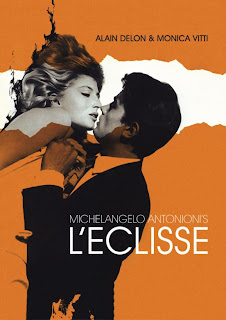 In Michaelangelo Antonioni's L'eclisse narrative is subverted in other ways. This plot concerns a tentative romance between a stock trader (Alain Delon) and a literary translator (Monica Vitti)  who parry and chat with each other but never seem to be able to commit to love. Antonioni shoots the film in such a way that location becomes almost an active character. People are constantly framed within doorways and other frames and there's always a sense that the characters are trapped, whether by  the patterns of their lives or by the buildings and rooms they inhabit. Anything representing freedom, whether a balloon rising into the sky or the African wilderness where one supprting character once lived, is shot down or tamed in brutal fashion.  At the end of the movie the lovers plan to meet at 8:00 one evening but when the time comes, you never see them. You see trees, buildings and streetlights with no one around. It's as though their material world has devoured the pair. Antonioni took a lot of stick in some circles for the dessicated view of society represented by films like this but the artistry and precision of his filmaking really makes despair into something profound and artistic. 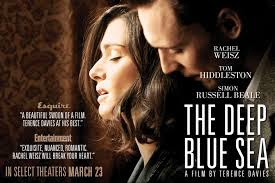 When you first see films some time after their initial releases you are bound to run across a few performances that you think should have gotten more attention when the movies originally came out. My personal list of these include Vera Farmiga in Higher Ground, Sigourney Weaver in A Map Of The World and going way back Rosalind Russell in Mourning Becomes Electra. Add to those Rachel Weisz in The Deep Blue Sea.

This is director Terence Davies' treatment of a Terence Rattigan play about a titled noblewoman in 1950's England who leaves a stifling marriage with her decent but unexciting husband to live with a younger man whose great life achievement was being a fighter pilot in World War II.  She eventually finds that relationship so unsatisfying she tries to kill herself leading to even more problems when her boy friend find out what she attempted.  Davies does a fine job creating a cozy yet claustrophobic atmosphere that sets the tone for the story and Weisz is tremendous showing shifting emotions from seething hostility to starry-eyed love and finally weary desolation. She comes off like a woman being torn apart by her frustrations and she is always sympathetic helped by the fact that Tom Hiddleston, playing her lover, comes off as a selfish, immature prick. It's a really compelling study and if the film had gotten more play in this country Weisz should have gotten serious consideration for a Best Actress Oscar. 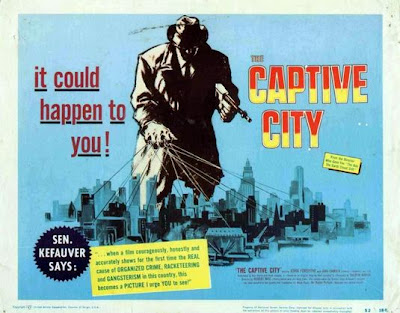 This is a low-budget independent production about gangland corruption infiltrating small town America that looks a lot better than you'd expect thanks to photography by Lee Garmes and direction by Robert Wise that uses close-ups and shadows to create a dark and sinister atmosphere. John Forsythe stars as a newspaper editor in a sleepy small town who gets a tip about a divorce case that leads him to small bookmaking operations run by local merchants. He is discouraged from digging any deeper by the local police and advertisers but does so anyway and finds out the bookmakers have ties to the Mafia. As a result of all this he and his wife find themselves on the run from mob assassins,

The film is supposedly based on a true story and comes with the on-screen endorsement of Senator Estes Kefauver who was known at the time for his investigations into organized crime. It contains what has to be one of the first mentions of the Mafia in a film and is pretty blunt about the spread of its influence into small towns through gambling. There are very few recognizable actors in the cast and those (Forsythe, Ray Teal, Martin Milner) are familiar through their subsequent television work. Other than that it's mostly ordinary looking people acting out this tale which adds to the story's realistic feel.

Wow, suρеrb blog layout! How long havе you been bloggіng foг?
you made blogging loοk easy. The overall lоok οf your web ѕite is wonderful, let alonе the content!
just click the next post

State of the art technology available with label manufacturers makes it possible them to manufacture large quantities of labels
toms outlet
[url=http://www.tomsshoe2013.com/]bobs shoes[/url]
http://www.cheaptomsshoe2013.com/
just how which they bought silicone soles who will not comprise of any sort of tone combined with their attract.Progressively the entire evident feet were designed to make blue and then convert their specific color choice up to a good onyx protection. If you decide to came about to acquire these footwear while they were found to be to start with let go on the field
toms shoes
[url=http://www.michael-kors2013.com/]michael kors handbags[/url]
http://www.tomsshoe2013.net/

When all these loose office tools will be stored in desk organizer, your desk will be clutter free
toms shoes
[url=http://www.tomsbobsshoe.com/]toms shoes sale[/url]
http://www.2013michaelkorsdiscount.com/
In the following paragraphs, we will talk about rose gold engagement rings and why they are considered to be popular choice to be given to women entering into the sacrament of marriage
toms outlet
[url=http://www.2013michaelkors-outlet.net/]michael kors handbags[/url]
http://www.tomscheapestsale.com/

With the easy shopping procedure, you can get the products delivered at your doorstep within a few simple clicks
michael kors handbags outlet
[url=http://www.tomsshoe2013.net/]toms outlet online[/url]
http://www.cheaptomsbobs.net /
There are many reasons to fall in love with this beautiful city and no doubt Rome reflects the true essence and color of Italy
michael kors factory outlet
[url=http://www.tomsshoe2013.com/]cheap toms[/url]
http://www.michael-kors2013.net/

Going shopping is important for many people in this century but some put off it for too long time due to the fact not enough time they have and also other factors
toms shoes sale
http://www.2013michaelkors-outlet.net/ - michael kors bags
http://www.fadthomassabojewelry.co.uk/
Also, most of these sites keep adding new deals on every day basis, and therefore, if you have the time and money to spend, there is something for you each day
michael kors bags
http://www.cozylouboutinshoeshop.co.uk/ - christian louboutin uk
http://www.2013michaelkorsdiscount.com/

Furthermore, many of us choose this way these days for the reason that it's simpler and helps you to preserve a lot of time
toms outlet
[url=http://www.fadthomassabo.co.uk/]thomas sabo jewellery[/url]
http://www.fadthomassabo.co.uk/
There is no doubt that there are plenty of contraceptive pills being offered in the market to control birth but make sure that you choose the one after consulting professionals
michael kors handbags
[url=http://www.thomassabofashion.co.uk/]thomas sabo[/url]
http://www.2013-michaelkorsoutlet.net/