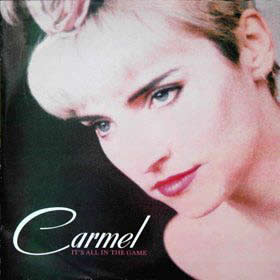 In the 1980's as the ashes of Britain's punk rock explosion cooled off, a new musical wave seemed to emerge every few weeks, supposedly making the last one passe. At one time or another, there were the New Romantics, industrial, goth, the Germanic influence of Martin Hannett and the Factory records label, and a ska revival. For a while there was a turn away from all types of rock music in favor of other, more sophisticated pop musics like Jazz, Bossa Nova, and continental pop. This movement really got kickstarted when Paul Weller disbanded the Jam to form the Style Council but soon all sorts of seductive female singers on their own or fronting bands and dealing in sophisticated blends of Jazz, funk and soul came along. These included performers like Sade, Everything But The Girl, Weekend, Swing Out Sister and the subject of this piece, Carmel.


Carmel was both the name of a trio and its lead singer, Carmel McCourt. In school in Manchester after other musical adventures McCourt joined up with bassist Jim Parris and his cousin, drummer Gerry Darby to form the band. I got their first EP way back in 1982 and immediately paid attention.  The lead track, "Tracks Of My Tears" stayed most in my mind. Their treatment was very skeletal with the song's distinctive melody replaced by a simple downbeat jazz-blues walking rhythm by acoustic bass and drums with Carmel doing the heavy work singing the lyrics in a unique tough and brassy style that didn't sound like any of the softer voiced singers around at the time. She didn't have a conventionally pretty sound or a big range but there was power and emotion along with a note of wavering uncertainty in her voice that underlined the fact this was a real person singing. It got me to pay attention when further records came out, a chilling gospel-powered single, "Bad Day" that had Carmel shouting over organ and a backing choir, and two full albums, The Drum Is Everything and The Falling, which featured excellent songs like "More, More, More", "The Drum Is Everything" and "Mercy" and found the trio further experimenting by adding African and Caribbean elements to their mix.

As time went on I didn't see any further releases by the band in the stores outside of a live CD, Live At Ronnie Scott's, so I basically forgot they existed.  Then about a month ago I came across a small review in Jazzwise magazine of a new Carmel CD called Strictly Piaf, an Edith Piaf tribute that was her first recording in 17 years. After searching around on the Internet I learned that the band had been hugely successful in France for many years and that of late, they had been busy separately with writing, teaching and performing gigs. Darby officially left a few years ago leaving McCourt and Parris as the core players on the new CD. Thanks to Amazon almost no CD is hard to find anymore so I ordered Piaf and was happy to find things much the same as I remembered but improved. 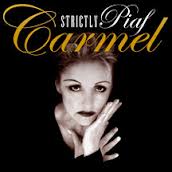 McCourt's range is stronger now. She hits high notes and holds them more effortlessly than she did before but the human, soulful bleat that makes her voice so arresting is still there. The CD is all Piaf material but, as in the past, wildly rearranged. "Sous Le Ciel De Paris" is done as mid tempo lounge jazz, "Les Amants D'un Jour" is sung in French to a dark reggae beat and "Running" is done as ambient funk with trumpet and piano featured. "Autumn Leaves" is sung hauntingly over rippling electric piano, "The Poor People Of Paris" is sludgy like a slow motion carousel and "La Vie En Rose" is unrecognizable with a chorus of treated voices singing the song's lyrics over a rippling synthesized vamp. Only "Mon Legionnaire" sticks close to Piaf's torchy vibrato and McCourt is as good doing that as she is at everything else.

Further investigation revealed there had been four other Carmel CDs released in the 80's and 90's I had completely slept on, Everybody's Got A Little...Soul, Set Me Free, Good News and World Gone Crazy. Fortunately all four were reissued just last year in fully tricked out deluxe packages  with remixes, b-sides, and live recordings. I have the first two now and I expect the others will follow. This music is gutsy and thrilling in all the best ways.

Here are a couple of examples of what I'm talking about. First a live TV performance of "Sticks And Stones":


And a TV clip of "Mercy". They may be playing along to the record but Lord what a record! Have mercy, indeed...