I've long been intrigued by what is nowadays called "new music"  (I guess "modern classical music" sounds too old-fashioned) but I've never gone deeply into it the way I have jazz. I do have some random Ives, Stravinsky and Bartok in my ever-growing horde of CDs but I don't have any real handle on the breadth of 20th and 21st century classical music out there.  I do know about soprano Dawn Upshaw though and when I found out she was performing at the Kennedy Center Tuesday night, I made time to see her. I was very glad I did.

The concert opened with Upshaw performing two pieces by composer Osvaldo Golijov, one of her frequent collaborators, with a string quartet. I am not an expert on classical singers but I was touched bu the warmth and humanity in Upshaw's voice. Her singing is not as athletic as others I've heard but it's still very moving. The strings were mostly subdued and melancholy beneath her as she sang poems by Rosalia de Castro and Emily Dickinson and it was a graceful beginning to the show.

Upshaw and the quartet left the stage and after a few more chairs were added and rearranged, out came the Crash Ensemble, a new music group from Ireland, assembled by composer Donnacha Dennehy as a vehicle for performing his music. For this first number the group consisted of two violins, one viola, one cello, one string bass, and one each of clarinet, flute, trumpet, trombone and electric guitar plus a percussionist who mainly seemed to play various vibraphones and marimbas. They were joined by vocalist Iarla O'Lionaird who specializes in traditional Gaelic singing as they performed a Dennehy piece called "Gra agus Bas" (Love and Death). 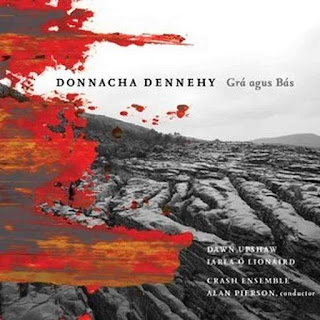 This was amazing. O'Lionaird started in murmuring lines in old Gaelic with intricate rising and falling pitches while the ensemble attacked the music with a rhythmic, repetitive vigor that, in my limited frame of reference, reminded me of Steve Reich or Phillip Glass, and was flavored with traces of Irish jigs and fiddle tunes. Coming from a background in jazz and improvisation I was really taken with the rhythmic bounce carried through the strings and woodwinds with the percussion rattling around the edges and the brass and guitar adding carefully placed long chords. In the most intense moments this reminded me of saxophonist Evan Parker and his circular breathing feats, a twirling ribbon of sound that seemed go on forever.  While that was going on, O'Lionaird was crying out over the top, bring even more tension to the work. I've heard composers Dave Douglas and Sean Noonan use that type of folksinging in a jazz context but I've never seen it used in this fashion before.


After a needed intermission the Ensemble returned, this time with Upshaw in tow. The group was a bit different. The trumpeter was gone but a pianist and accordionist were there in her place. This combination performed "That the Night Come", a Dennehy song cycle constructed from six W.B. Yeats poems.  The group's activities were a bit more solemn this time as Upshaw's haunting voice took the lead. The rhythms still flowed freely with the strings and woodwinds again doing the heavy lifting but there seemed to be a graver and more internally turbulent feel to this piece. On the last piece of the suite, "That the Night Come", a bit of the earlier intoxicating highs returned as the ensemble picked up the pace and Upshaw soared to a powerful conclusion and the audience responded warmly. 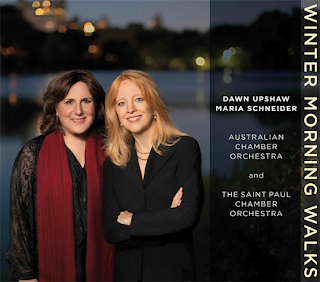 Great.  Now I've got some more musicians to spend money on. What's next? Upshaw recently released a collaboration with one of my favorite "jazz" composers, Maria Schneider,Winter Morning Walks (left), and I'll probably order that this weekend. It also turns out that all the Dennehy music here was released on a 2011 Nonesuch CD by these same performers so that's definitely on my radar as well. I spend too damn much on   music but when it's this rewarding, I don't regret it a bit.