The Verdict is probably the only film in which the great character actor Sydney Greenstreet got top billing. It's a Victorian murder mystery where he plays a Scotland Yard police superintendent who finds out he just sent an innocent man to the gallows minutes after his execution. Greenstreet is relieved of his duties but soon finds himself called in to help investigate another murder which turns out to be connected to the earlier crime.

The movie is a serviceable little mystery with director Don Siegel playing up the shadows and atmosphere but the real fun comes from the byplay between Greenstreet and his frequent co-star Peter Lorre who plays his friend, a playboy artist. The mystery seems trickier than it otherwise might because those two can make even the most innocent line sound sinister. Between Lorre's melodiously creepy line voice and Greenstreet's shifty facial expressions you're convinced one or both of them must be guilty of something although that is not fully cleared up until the last few minutes of the film.

At the end it turns out the murder was an arguably justifiable killing but the murderer is sent to prison anyway.   That's not the case in the next film... 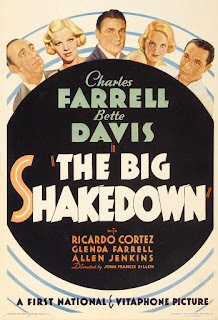 Showing what you could get away with in the Pre-Code era, a bad guy also dies in this film and in pretty gruesome fashion to boot, yet his killer is allowed to escape scott free.

The movie itself is a lesser example of Warner Brothers' social issue films, this time concerning a seemin g then-current problem of counterfeit prescription drugs. The plot has a bunch of gangsters who, run out of the liquor business by the end of Prohibition, decide to start a new racket in selling counterfeit, cut-rate products to drug stores. With the help of a young chemist, they start with phony toothpaste and cosmetics but then branch out into medicine where, as you might imagine, trouble really starts.

The film is directed by John Francis Dillon, who passed away the year this was released, and does not have the anger or energy of the best Warners message movies of the time like Five Star Final.  The chief gangster, played by Ricardo Cortez, comes off as a likable sort of slimeball when he's not threatening somebody and his girlfriend, played by Glenda Farrell, and his gang, led by Allen Jenkins and Dewey Robinson, comes off as more comic relief than anything else. In this atmosphere the two killings and other bits of violence that occur are really jarring. It also doesn't help that Charles Farrell, as the chemist, is a far more doughy hero than Edward G. Robinson or Paul Muni would be, and that Bette Davis is stuck in a nothing role as his girlfriend. Still it's got the Warners streetwise snapiness to it and it's worth a look for its unusual plot. 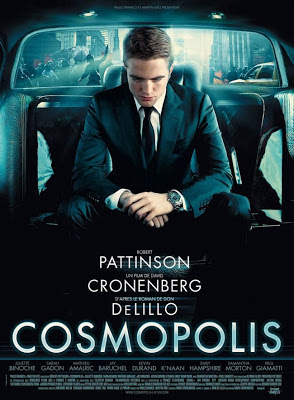 The movie that makes you ask yourself "Is a haircut really that damn important?"

This overlooked 2012 gem is a David Cronenberg work from a Don DeLillo novel that chronicles the life of a young billionaire financier on the day he world comes crumbling around him. Eric Packer, played by Robert Pattinson, just wants to get in his limousine, go across Manhattan and get a haircut. Along the way he has to deal with massive traffic jams, a new wife he seems to have picked up in an arranged marriage, anarchist rioters and his fortune dwindling down to nothing. And oh by the way, somebody is trying to kill him as well.

I haven't seen A Dangerous Method yet but in his films just before that, Cronenberg seemed to getting away from the kind of bizarre stories that made his reputation. Here he definitely goes back to the crazy.  Most of the film takes place inside Packer's limo, his home for meetings, doctor visits and even sex, an extremely controlled environment where he is in charge. At the same time there is a sense of this man slowly disintegrating, coming out of his confined cocoon and even seeming to enjoy his loss of control. I have stayed far away from the Twilight movies but here Pattinson shows he'a s good actor, slowly letting expressions come to light and making the clipped, elliptical dialogue, which Cronenberg takes straight from the book, sound natural.  There's also a very good supporting cast around him, including Samantha Morton, Juliette Binoche and Paul Giamatti as various people in Packer's life.  The claustrophobic, unbalanced side of Cronenberg's art is really to the fore here. 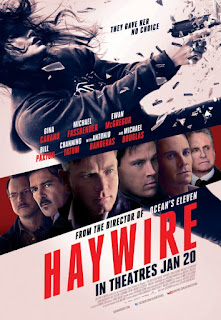 There are very few movie genres Steven Soderbergh hasn't tried his hand at and Haywire is his version of a spy movie,  a conventional plot about a private company agent who is double-crossed by almost everyone.  The movie's main hook is that the agent is played by MMA fighter Gina Carano allowing the action sequences to be done in close focus with realistic-looking and vicious fighting.

The film feels like Soderbergh decided to tell a James Bond story in the style of John LeCarre. The action is there but very subdued compared to most modern action films. There are no loud explosions, or wisecracks, just subtle bits of humor like the very last shot.   Instead the film has a very cool and intense film with David Holmes' taut electronic score being the closet thing to bombast. Carano carries her part off well. She is not called on to do a lot of heavy acting but she reads her lines convincingly and she's got an amazing lot of name actors around to play her various friends and enemies in Ewan MacGregor, Michael Douglas, Channing Tatum, Bill Paxton, Antonio Banderas and Michael Fassbender. Soderbergh hasn't stacked the deck like that since his Oceans'11 movies.  Carano will next have a part in Fast & Furious 6 in a couple of weeks. Hopefully that will take her farther into a decent film career and away from a job where people hit her for real.