Weekly Movie Roundup #14: Chekhov In The Time Of Stalin

It's 1936 in the Soviet Union. Colonel Sergei Kotov, a noted hero of the Revolution, is enjoying a summer holiday with his wife and daughter at her family's country estate. One day the family receives a surprise visit from Mitya, an old family friend and the ex-fiancee of Kotov's melancholy wife. This starts a round of reminiscences and regretful flirtations that seem straight out of a Chekhov play but it soon emerges that things aren't the way they seem on the surface. In fact the plot take an abrupt and harsh turn which you might guess at from the first sentence I wrote. This is set in Stalin's Russia, a world where few things were what they appeared to be.

This film was co-written and directed by Nikita Mikhalkov who additionally plays the colonel with a warm stoicism that at first seems puzzling, then, when as the story unfolds, inevitable. Mikhalkov also directed a 2007 film called 12, which adapted the play 12 Angry Men to the economic and political realities of post-Soviet Russia. Similarly in this film he takes a scenario more suited to the well-to-do classes of Czarist Russia and reimagines it for a much darker world. It's a movie that sneaks its darkness up on you, giving at first a picture of warm family life that makes it much more effective when it all comes apart. Even a seemingly-unrelated running gag about a truck driver lost in the countryside turns ugly by the end. This film was highly acclaimed in its day, winning both the Best Foreign Film Oscar and the Grand Prize at Cannes. It's easy to see why.

Since writing the above, I've learned that Mikhalkov made a sequel to this film in 2010, Burnt By The Sun 2, set during World War II. For this he resurrected three characters who were all dead by the end of the first film. Some people just can't leave well enough alone. 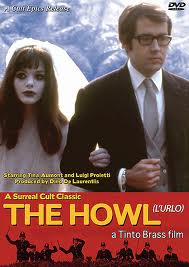 The DVD cover for this film calls it "a surreal cult classic".  I guess that's one way of putting it. This is an early film from Italian director Tinto Brass known to some film buffs as the maker of a bevy of Italian sex comedies and more generally as the poor bastard whose name ended up on the infamous Bob Guccione mess, Caligula. The Howl is an attempt at avant-garde filmaking in the spirit of the turbulent late 60's when it was made. Its thin plot consists of a young woman leaving her stuffy fiancee to run about the countryside with some nondescript male free spirit type, encountering a lot of allegorical scenes involving sex, military violence, comical police and cannibalism.

There are some watchable parts to this, particularly the section when the pair runs into soldiers in a bombed-out city but watching it almost 50 years after the fact, its mixed message of violent revolution and beatific freedom comes off as pretty tired.  Also Brass was far from the only director exploring the '68 revolutionary mood back then and this movie really loses out when compared to others' similar work of that day, especially Jean-Luc Godard's Weekend which had a real moral force behind its surreal anarchic spirit.  The Howl simply looks puny and cliched by comparison. 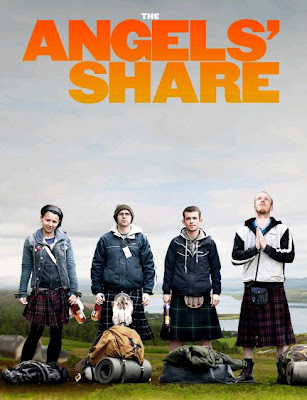 British director Ken Loach is known mostly for grim social consciousness films but he's been lightening up in recent years. 2009's Looking For Eric was a warm and funny film about a beaten down postal worker who finds the courage to face his problems through his imaginary friendship with a famous soccer player and The Angels' Share is a similar tale.

This time his protagonist is Robbie, a young man who lives in the Glasgow slums and is at a low point in his life. He's constantly in trouble with the law for fighting, he's got people after him as part of an old family feud, he can't get a job and his girlfriend has just had a baby boy. His guardian angel turns out to be Harry, his supervisor in a community service program. Harry tells Robbie about the arts of making and appreciating fine Scotch whiskey.  Robbie and some friends visit a distillery and learn that a particularly rare whiskey can sell for a lot of money, leading them into a scheme to heist some of a rare batch scheduled to be auctioned for thousands and selling it to a whisky collector.

The film feels authentic in its views of Glasgow, Edinburgh and the Scottish countryside and everything Robbie and the rest of the cast act out, the frustrations, the humor, the anger, feels very real. Every time the story threatens to turn into cheap and easy melodrama, it doesn't, going for something more mature and recognizably human. Even the comedy coming from Albert, the thickest member of Robbie's gang, is fresh even as goofy as it can be. Loach here maintains his ability to convincingly tell the stories of the down and out even when he's giving them happy endings.
Posted by Jerome Wilson at 3:37 PM

Labels: Burnt By The Sun, film, The Angels' Share, The Howl, Tinto Brass