Weekly Movie Roundup #12: It Sort Of Really Happened Like This... 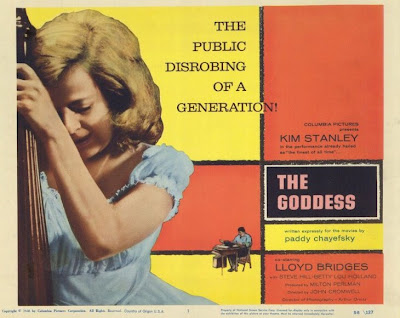 This is a 1958 film about the life of a poor, small town Southern girl, Emily Ann Faulkner, who grows up to be a glamorous movie star but suffers horrendous emotional distress throughout her life. She is first seen as a four-year-old girl raised reluctantly by a mother that doesn't even want her around.  She is starved for companionship from a very young age and in her adolescence makes out with high school boys just to have to someone to talk to.

She eventually meets and marries a lonely, depressive soldier and has his child but that doesn't last. She makes her way to Hollywood, starts getting bit parts in movies and marries a retired boxer partially because she thinks the publicity would be good for her career. That doesn't work either. One minute she makes plans with her husband to quit movies and move to St. Louis. The next, she says she isn't going. The two stay in Hollywood growing farther and farther apart. She eventually becomes a star with, it's strongly hinted, the help of the casting couch.  As a star she's caught in an endless cycle of breakdowns, suicide attempts and temporary recoveries as she looks for companionship everywhere whether from anonymous lovers, people she barely knows or her now-religious mother. The film ends as Emily breaks down at her mother's funeral, has a futile reunion with her first husband and seems forever trapped on her sad merry-go-round of a life with only her secretary to look after her.

This film has a lot of heavy pedigrees. The lead is played by Kim Stanley, regarded as one of the great actresses of her time and the script is by Paddy Chayefsky then in the summer of his writing fame. The music comes from the great composer Virgil Thomson though he writes an oddly jaunty score that seems more appropriate for a movie about riverboats and minstrel shows in the Old South than a heavy drama like this. Director John Cromwell progresses the movie through a lot of short scenes full of clipped Chayefsky dialogue with a couple of patches of extended soliloquies. The wordy parts avoid getting stagy thanks to the excellent performances of Stanley and Steven Hill and Lloyd Bridges as Husbands One and Two.

The film is supposed to be loosely based on the life of Marilyn Monroe and though parts like marriage to a retired athlete reflect her life up through 1958, the time of the film's release, she was far from the only Hollywood star who had an unhappy childhood, slept around to get ahead or had nervous breakdowns.  The  tragedy of Emily's life is a sadly familiar show business story and this is one of its most compellingly told versions.

This film is based on the W. Somerset Maugham novel that was in turn based on the life of painter Paul Gauguin.  It tells the story of Charles Strickland, a respectable British stockbroker who after 17 years of married life, suddenly decides to leave his wife and family and move to Paris to become a painter.  He lives a life there totally obsessed with his work and indifferent to the feelings of others. The wife of a painter who admires Strickland goes off with him and he callously deserts her after a short time, showing no remorse when  she commits suicide. Eventually Strickland's urges take him to Tahiti where he paints the natives and wildlife. He marries an island girl who owns a decent-sized family business and settles into a happy life with her until he contracts leprosy and dies, leaving behind a huge painting of the island and its people which his wife then burns in accordance with his dying wishes.

Strickland is spoken of in the film as an "unmitigated cad". Who better to play him then but George Sanders?  Sanders was known more for playing roguish good guys like the Saint and the Falcon at the time he made this but his cold-blooded scoundrel persona of later films is very much in the house. He is contrasted with Herbert Marshall as a writer who is the representative of decent thought and deed in the picture. He narrates the film as a recurring acquaintance of Strickland's and provides the eyes through which we see the story unfold.

This film was actually out of circulation for many years until it turned up in a restored version on Turner Class Movies in 2011.  The main body of the film is in black and white but there is a slight tint on the Tahiti scenes and the mural that fills Strickland's house at the end is shown in full color, the only time nay of Strickland's paintings are ever seen on camera.

One other interesting thing is that although Strickland certainly paid for his sins, movie production code style, by dying of leprosy, someone didn't think that was a strong enough message. A title card at the end of the film states that although Strickland had great talent, he was a really bad person and deserved his awful death.  Like somebody was going to watch this movie, then leave their families to go paint? 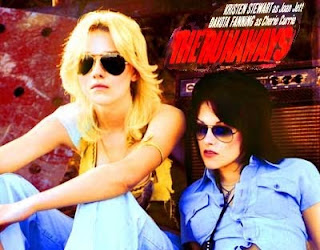 This film depicts the short but volatile career of the all-girl rock band The Runaways. At least it sort of does. It focuses on two disaffected teenagers growing up in 70's Los Angeles, Cherie Currie and Joan Jett.  Joan is an aspiring musician who runs into entrepreneur Kim Fowley at a club and gives him the idea to start a band of all teenage girls.  They get some other girls together and start rehearsing but its soon apparent that the group needs a charismatic singer. Fowley and Jett find one in Cherie Currie, a 15-year-old David Bowie fan. She has no singing experience but that's no matter as Fowley gets the dangerous sexual presence he wants out of her and the band eventually plays its way into a record deal and superstardom in Japan before drug problems and personal animosities tear them apart.

This movie is good at creating the sweaty atmosphere of 70's Hollywood and Dakota Fanning, Kristen Stewart and Michael Shannon all give good performances as respectively Currie, Jett and Fowley but there is something off about the whole affair. The Runaways were a complete five person band yet the film acts like it was Currie, Jett and a bunch of guys named Fred. It completely concentrates on the two leaders while the other members, Lita Ford, Jackie Fox and Sandy West fade into the background.  This is somewhat understandable since the film is based on Currie's memoirs, she and Jett were actually on the set giving Fanning and Stewart advice and Fox would not even give permission for her name and likeness to be used in the film. Still the movie gives the impression that the other three just came from and went back into nowhere.

The movie really suffers in comparison to a 2005 documentary about the group made by Vickie Blue, one of the band's later bass players, Edgeplay: A Film About The Runaways. That was a more in depth study of the band's history with more viewpoints heard, although Jett did not participate, and a better sense of its importance in musical history. The 2010 Runaways is just a predictable rise-and-fall musical drama that's tamer than it should be.