I found out yesterday that Mike Vraney passed away from lung cancer on January 2 at the age of 56.  This doesn't mean anything to the vast majority of the cult movie/pop culture geek world but it should. 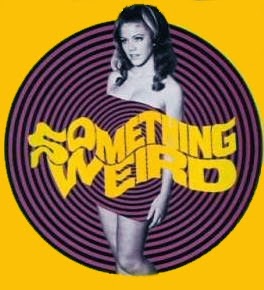 Vraney was the founder and owner of Something Weird Video, a home video company that specialized in releasing obscure exploitation and genre films of all types. There are several companies out there that deal in that stuff but no one has done it to the depth of Something Weird.  They've released the usual sorts of horror and science fiction schlock from the Hollywood fringes but also European spy films, sword and sorcery movies, anti-drug films, cartoons, rare TV pilots and innumerable other ephemera.  Their most significant work has come in bringing the great era of exploitation cinema back to light. With the help of legendary exploitation producers David Friedman and Barry Mahon, they've uncovered hordes of softcore nudie films, striptease shorts, peepshow loops, and burlesque films and introduced them to generations of new fans. The only two feature films Bettie Page ever made? Something Weird put them out.  A promo reel of animated commercials by legendary artist John Hubley with music from Dizzy Gillespie? That too. Burlesque features featuring striptease legends like Tempest Storm and Lili St. Cyr plus baggy pants comics doing ancient vaudeville routines? Correct and present. The works of notorious adult film directors like Herschel Gordon Lewis, Doris Wishman and Roberta Findlay?. Yep. That plus compilations of female wrestling, classroom anti-drug films, softcore and hardcore sex film trailers, striptease acts, drive-in intermission ads and much more.

As you can probably tell, I'm a big fan of Something Weird. I've rented and bought their stuff for years.  What Vraney and his staff did was film excavation very different from what entities like the American Film Institute and Turner Classic Movies champion.  They didn't work with lost classics or B-level studio programmers. The company specialized in movies from the bottom of the food chain, the stuff shown as come-ons in storefront theaters and carnivals, or triple features in rundown urban grindhouse theaters, movies where any cockamamie thing imaginable went on so long as a naked girl showed up on the screen every so often. Then there are the movies that weren't intended for the public at all, industrial films intended to be shown to retailers and salesmen that pushed everything from milk to whiskey, classroom films designed to scare teenagers straight about everything be it drugs, drinking, sex, fast driving, cheating or personal hygiene. Beyond the entertainment value these works are remarkable little time capsules of what people cared about way back when, what turned them on, what behaviors were either encouraged or frowned upon, what was considered burning issues once upon a time. Among the delights of their intermission compilations include ads campaigning against Pay TV (the ancestor of cable) and Daylight Savings Time.

Other organizations work on bringing many other types of movies back from oblivion and into the public light like rare silents or Japanese samurai films. All that is important work but what Mike Vraney did was really important as well because the things Something Weird has preserved shouldn't disappear from history. I actually met Mike Vraney once. It was at a local nostalgia convention and he was at a Something Weird table with David Friedman selling his tapes. Friedman was telling a young couple stories about his producing adventures and I just went through the tapes on sale and bought a couple from Vraney. I don't think I said much to him but now I wish I'd said "Thanks". I now appreciate the great work his company did.


This is a link to a tribute to Vraney on the Something Weird website:  http://www.somethingweird.com/

And this is the wonderful introduction that opens every Something Weird disc, full of the glories of their amazing catalog:

Posted by Jerome Wilson at 9:58 AM