Tuesday I watched part of the last night of TCM's Hal Roach tribute. First up  was Laurel and Hardy's Sons Of The Desert with Stan's and Ollie's teamwork at its zenith. I would now put up that one upthere with Duck Soup as my favorite comedy of all time. Then I saw a real curio for the first time, General Spanky. 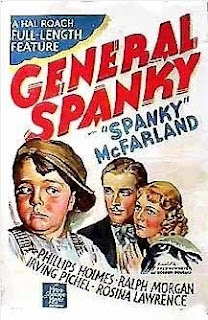 On TCM, host Robert Osborne referred to this as the only feature-length "Our Gang" movie but as this poster shows it wasn't intended to be seen that way.  Only Spanky McFarland himself is listed. Going by this you wouldn't even know any of the other Our Gang kids were even in the film.  This picture comes off more as Roach's failed attempt to make Spanky into a big time child star after the fashion of Shirley Temple or Our Gang veteran Jackie Cooper.  Part of the problem is that someone at the studio got the bright idea to dump the modern-day setting of the shorts and stick Spanky in a Civil War movie, probably because that had worked so well for Temple. This is just one of the things that goes wrong with the movie.

The film actually starts out focusing on Buckwheat (Yes, some of the other kids are in this movie, if way down in the cast list.) He's a slave on a riverboat who gets separated from his master and hooks up with Spanky who here is an orphan shoe shine boy. They make friends with a young plantation owner who goes off to fight for the Confederacy when war breaks out and with some other kids, including Alfalfa, organizes a homemade "defense force" to protect the women and children while the men are fighting. 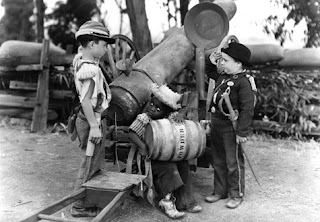 How many things are wrong here? First of all, instead of the kids being the center of attention as they always were in the shorts, a lot of time is spent on the various adults in the story with Spanky and the rest being just around the periphery. Also when adults figured into their best comedies, they were often fine comic actors like Billy Gilbert or Edgar Kennedy.  Here you get the bland likes of Phillips Holmes, Ralph Morgan and Irving Pichel playing it completely and boringly straight.  Pichel, in particular, seems really out of place. He plays the villain, a crooked gambler turned incompetent Union officer, with no hint of emotion.

Spanky is expsoed as not really having the acting range to carry the kind of comedy-drama this wants to be and outside of a couple of bits, like Alfalfa's one song, most of the kids' antics aren't that funny. Then there is the whole tenor of this being a sentimental view of the Civil War South. The great majority of these old movies that show contented black slaves laughing and grinning on the plantation don't bother me but this one is a little disturbing in that they are actually called "slaves" several times, a word I don't usually notice in these pictures. That word especially sounds nasty when used to refer to little Buckwheat. It's a bit grim at one point when, separated from his owner, he walks around asking other white men if they will be his Master.  He, Farina, Stymie and the other black Our Gang members may have been equal to their white pals in the shorts but this time things were clearly different.

It's no wonder this movie didn't do weel at the box office. There was far too little of everything that made Our Gang successful and nothing but dull Southern soap opera replacing it.
Posted by Jerome Wilson at 5:32 PM