Turner Classics Movie has been commanding more of my attention than usual this month because of their Hal Roach tribute, 24 hours of comedy shorts and other material from the Roach studio every Tuesday. I've yet to do the intelligent thing a movie buff should and buy a DVR or Tivo so I've been limited to watching just what I can when I'm not sleeping or at work. Nevertheless I've been able to see a lot of good comedies, some I'd seen before and some I hadn't. 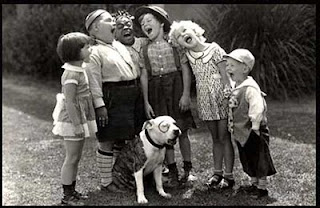 On the 4th it was 24 hours of Our Gang shorts, including a bunch of silent ones I'd never seen before. The earliest one shown was "Fire Fighters" from 1922 which oddly began with what seemed to be a clip from Roach's bizarre Dippy Doo Dads series, a couple of minutes of animals dressed up as humans, before switching to Our Gang, at that point just Ernie "Sunshine Sammy" Morrison and a bunch of guys named Fred, pretending to be firemen. I also noticed that several of the sound shorts were really remakes of the silent ones and that "Love Business", where Jackie Cooper and Chubby Chaney are rivals for the affection of their teacher, the beloved Miss Crabtree, still holds up as a very funny movie.

The 11th had a full day and night of my heroes, Laurel and Hardy. I'd already seen all of the ones I was around for but not for many years. The genteel brilliance of their style of slapstick was as funny as ever.

Last night started off a period of odds and ends. I saw another Our Gang classic, "The First Seven Years" with some footage that had always been missing from the TV prints I'd seen in the past. I also saw two early Charlie Chase talkies, "Whispering Whoopee" and "Fifty Million Husbands" that demonstrated how loosely put together the Roach shorts of that period were. All they seemed to do was come up with a premise and have the cast riff on it.  Thinking about it, this is true of the Laurel and Hardy and Our Gang comedies but I was so familiar with those I hadn't noticed it there. It really shows up though in "Whoopee". The "plot" is Chase hiring three ladies to party with some small town elders he wants to sell land to. From that scrap of idea they work all sorts of slapstick gags culminating in everyone spraying each other with seltzer bottles for two or three minutes.

The real rarities of the month came last night when ten episodes of a 1955-56 Roach TV show, Screen Director's Playhouse, were shown. This was a video version of an old radio show where A-list movie directors would film a program with a story and cast of their choosing, usually with some big stars involved.  The five episodes I saw were a mixed bag.  The most hyped show was "Rookie Of The Year" directed by John Ford and starring John Wayne. This was made around the time they did The Searchers together and featured Wayne as a sports reporter who stumbles across a potential big story that could ruin the career of a promising young baseball player. The story is well told enough and has good actors like Ward Bond, Vera Miles and James Gleason in it but it was very hard for me to buy the slow-talking Wayne as a slick, ambitious reporter.

"Lincoln's Doctor's Dog" which featured Robert Ryan as Abraham Lincoln didn't do much for me either. The other three were better. "Tom And Jerry" starred Peter Lawford and Nancy Gates as a married couple who decide to get a divorce on Christmas Eve. It could have been sappy but director Leo McCarey put some slapstick and an air of sophistication in the mix that hearkened back to his days directing Charlie Chase and Laurel and Hardy and also his screwball classic, The Awful Truth. It also had good supporting people like Marie Windsor and Arthur Q. Bryan AKA The Voice Of Elmer Fudd, as a sarcastic judge. 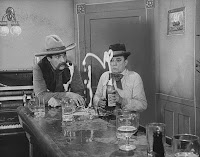 "The Silent Partner", which I'd seen before at Slapsticon, starred the sublime Buster Keaton (right) as a forgotten silent comic. It had plenty of time for Keaton for time to do his still hilarious physical comedy stunts and also featured Zasu Pitts, Joe E. Brown and Bob Hope.

Then there was "Number Five Checked Out" a crime drama directed by no less than Ida Lupino. It was much in the tenor of other noirish work she did, a story about two bank robbers who hide out in a deserted resort tended only by a deaf woman. There is a nice, dark fatalism to this story and good interplay between Teresa Wright as the deaf woman and William Talman, who had starred in Lupino's The Hitch-Hiker two years earlier, but the show is really stolen by the guy playing the other robber, Peter Lorre. 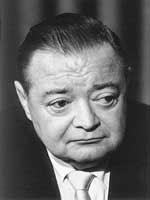 Lorre is at his creepy best here, nonchalantly pouting and purring in his silken voice. When his partner yells at him about shooting someone needlessly during the robbery, he just shrugs and says "There was a change of plans." He doesn't really upset the balance of the story just makes it a little off center.

Next week this tribute finally ends with a day of Roach features. I don't know I'll see many but they are starintg with Laural and Hardy's masterpiece, Sons Of The Desert, and the one and only Our Gang feature, General Spanky, which is really just Spanky, Alfalfa and Buckwheat, dropped into the middle of a Civil War story. Those two I know I'll see.
Posted by Jerome Wilson at 5:44 PM